The Final Call, which is based on Priya Kumar’s novel ‘I Will Go With You: The Flight of A Lifetime,’ has caught the fancy of many. 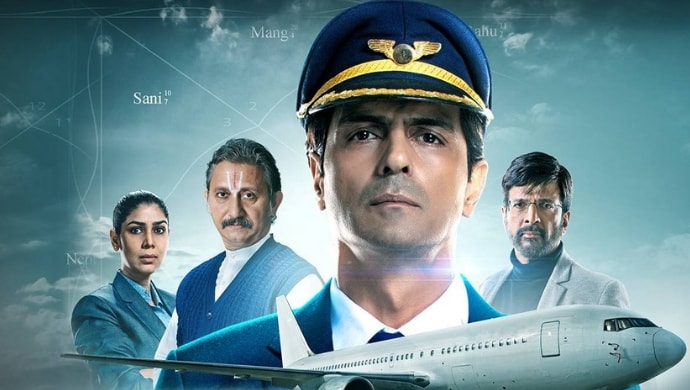 The Final Call, which is based on Priya Kumar’s novel ‘I Will Go With You: The Flight of A Lifetime,’ has caught the attention mostly because of its casting. National Award-winning Bollywood actor Arjun Rampal takes charge as the lead character of a mentally disturbed commercial pilot, a first in his career spanning across almost two decades. Arjun plays Captain Karan Sachdev who is flying a plane with 300 passengers aboard, from Mumbai to Sydney.

The series is the latest addition to Zee’s streaming service, ZEE5, and was added on February 22, 2019. It follows the story of Captain Karan, his fellow pilots, air hostesses, and few of the many passengers played by Jaaved Jafferi, Neeraj Kabi and others. Actress Sakshi Tanwar plays the meaty role of Air Traffic Controller in-charge Kiran Mirza. Things take a turn for worse as Karan is not at his mental best and ends up killing his co-pilots, intentionally and unintentionally both. He is ready to go to drastic lengths, but Kiran’s expertise might avert the tragedy.

If the plotline hasn’t piqued your interest already, allow us to give you five reasons to binge-watch the series on ZEE5 right away!

1. Arjun Rampal as ‘the man in uniform’!

Arjun’s deep baritone is enough to make girls go weak in the knees. Add to that the charisma of an Air Force Commander who later becomes a commercial pilot. The actor looks dapper in the white uniform and is a tonic for your tired eyes. Moreover, he is testing the waters, as it’s his first time playing a pilot. His character lays a heavy emphasis on the mental health of people we entrust our lives to. Not only is his performance brilliant, but his switch from his past to present is extraordinary. You wouldn’t want to miss the hunk go all-rogue!

2. Sakshi Tanwar as the ‘woman in charge’ in The Final Call!

We all remember Sakshi as the quintessential bahu from the famous Ekta Kapoor show. We have seen Sakshi as the supportive wife to Aamir Khan in Dangal and recently play Sunny Deol’s better half in Mohalla Assi. In a surprising track, Sakshi dons the hat of an officer-in-charge as Mumbai airport’s ATC Kiran Mirza. She brings to life the role of a stiff and extremely intelligent aviation authority who can understand criminal psychology and gets a job done with minimal damage. To say she aces her role to T would be a titanic of an understatement!

Also giving their best in the ZEE5 original are great acting names like Neeraj Kabi, seen as an astrologer Krishnamurti. Jaaved Jafferi plays a business tycoon Siddharth Singhania who is blessed with a unique sense to make the right decisions at the right time. Tiger Zinda Hai fame Anupriya Goenka plays Air Hostess Parineeti aka Pari.

The somewhat strange somewhat intriguing series explores the dangers of a human mind. It stresses the lack of checks when it comes to the mind playing tricks mid-air. A pilot who embarks on a suicide mission is handed over the responsibility of 300 passengers. But how safe we really are? Ignoring the symptoms can only make things worse for you and those around, and that’s what the series showcases.

At the same time, we also learn about dealing with people. The way people deal with the pilot in the series is worth mentioning.

4. The Final Call is based on a book I Will Go With You: The Flight of A Lifetime

The Final Call is ZEE5’s first show based on a book. Adapted on Priya Kumar’s I Will Go With You: The Flight of A Lifetime, the psychological thriller series revolves around different aspects of life. A pilot has resolved to end his life, mid-air, putting every passenger travelling on his plane in danger. Amongst the passengers is an astrologer blessed with a futuristic eye, a business tycoon with strong instincts, a troubled lover and a young chap.

All of their stories leaves us with questions about life and more, that stay with us long after we have streamed the last scene.

5. The Final Call will keep you on the edge of your seat

As a psychological thriller, The Final Call serves the purpose of keeping you glued to the screen. Not only will you gasp but also bite your nails through the scenes, wondering what happens next. Will Arjun turn out to be the baddie he seems in the teaser of The Final Call? Will Sakshi save the incoming threat and lives of the passengers?

Get all the answers to your queries by streaming The Final Call on ZEE5 now!

Daughter's Day Spl: 9 Daughters Of India Who Broke Every Stereotype Created By Society