His cunning mind, his evil laughter, the traits that make Kans of Paramavatar Shri Krishna a supervillian. 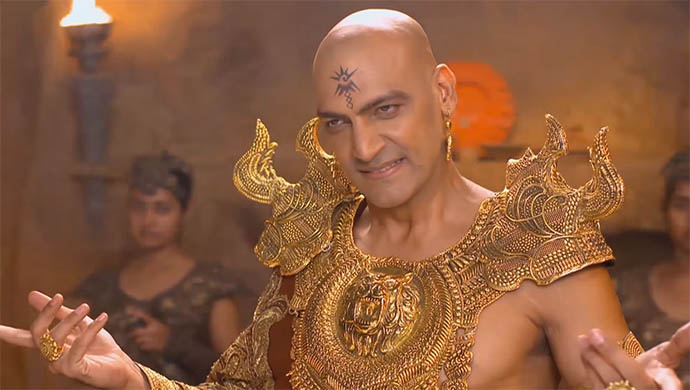 It wouldn’t be wrong to say that villains are the reason, our heroes are famous. There are very few villainous characters that stay in the audience’s minds forever. Actor Manish Wadhwa’s portrayal of Kans is one such role among them on the small screen. Over the time, it really seems like the actor was born to play this character of a tyrant ruler in And TV’s popular mythological show Paramavatar Shri Krishna.

But, what are the traits that make Kans the most feared villain ever witnessed on the small screen? Well, we have listed down five attributes, have a look at them.

The first thing that makes Kans’s character stand out in the show is his bald look. It really makes him look evil and sinister. The actor should also be credited for shaving off his head.

How could we miss out on this nefarious trait? His evil laughter shows that he has the power to rule over everyone. This is something that leaves a lasting impression on viewers.

Kans’s fierce eyes can send shivers down your spine.

One of the prime reasons that everyone loves to hate Kans’s character in the show is due to his cunningness.

5. The hunger of greed

There is no second thought about this that Kans’s character in the show is greedy in nature, and his hunger for it is never-ending. Who can forget of him imprisoning his own father King Ugrasena and becoming the King of Mathura himself?

Which quality of Kans make you hate him more? Let us know in the comments section below. Meanwhile, watch Manish Wadhwa play the role of Moropant in Manikarnika – The Queen of Jhansi.