The Total Siyapaa actress has aced played the part perfectly in many films including Hum Tum and Rang De Basanti. 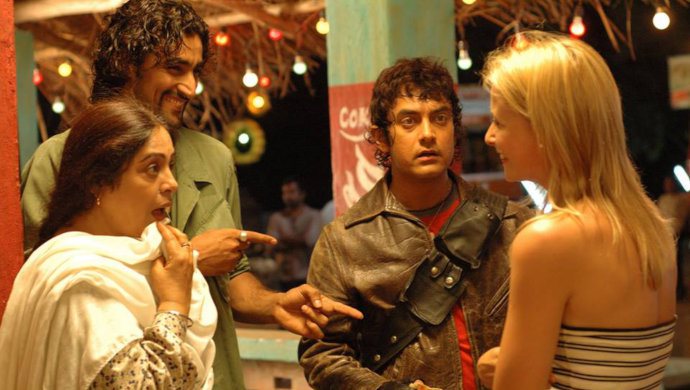 Kirron Kher is one of the most talented actors we have in the industry. Most filmmakers now know, that if the film has a character of a fun-loving and in some parts overbearing Punjabi mother, Kirron shall be the one to play it.

Here are five times she simply rocked on-screen with her entertaining roles.

The film tells the story of Aman (Ali Zafar) and Asha (Yami Gautam), two people madly in love and looking to seal the deal. The twist however is that Aman is a Pakistani and Asha an Indian. Things are made worse when Aman visits Asha’s house to meet her parents and learns that they are extremely anti-Pakistanis.

Kirron does justice to her character here. Hers is definitely the funniest character in the film and the scene that stands out is when she is reprimanding her granddaughter for play acting pregnant at such a young age. LOL!

Who can ever forget Kirron’s introduction scene in the film, right? The actor plays Aamir Khan’s mother, who is always taking jibes at him for turning into a brat after living in the city. We were in splits, when in one scene Kirron turns to Aamir and says, “phate kapde pehne hue, bada gentleman banda firta hai (you walk around like a gentleman in torn clothes).

Though Dostana was a homophobic film that is irrelevant today, you can’t deny that Kirron was sensational in it. Playing a mother to Abhishek Bachchan (Sam), the actress was hilarious as she dealt with the fact that her son is gay.

The actor shared great chemistry with Rani Mukerji (who played her daughter). Kirron was superb as  someone who likes to believe she’s young despite her age and tries to convince everyone.

The scene that stood out was when she meets Saif Ali Khan (playing Karan) for the first time and asks him to call her Bobby as it is her “pet name.” Hilarious!

Kirron played the overtly dramatic Bela Makhija and how. She was seen as Shah Rukh Khan’s (Om) mother and her character used to be a heroine in films. As a result, her personality is dramatic, and she tends to exaggerate everything she says or does.

There could have been a possibility of the actor butchering the role with overacting, but not Kirron. She displayed such control on her craft, despite playing a dramatic character as Bela. Hats off to her!

Which of these roles of Kirron’s have you liked the most? Tell us in the comments section!

Looking For A Good Punjabi Film? Zee 5's Original Film Khoj Is Here For You!