Aashka takes inspiration from the great Hollywood actors such as Tom Cruise, Brad Pitt and Antonio Banderas who have played Vampires on-screen. 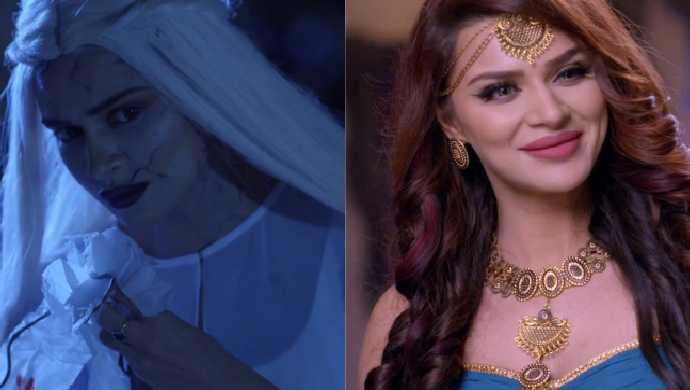 Gone are those days when the looks and character of the lead mattered the most and villains were given second-hand treatment. Now, the audience is equally interested in understanding the depth and detail of the villain character as much as the lead. What makes us talk about this topic today is the actress Aashka Goradia who essays the role of Satrupa in the popular horror show, Daayan. In the recent episodes of the show, we saw a spine-chilling avatar of this actress. In case you missed it watch it below:

We were aware of the seven avatars of this character named Satrupa but what took us by surprise was the revelation of her being a Vampire. Yes, you read that right. While everyone was expecting her to be a good soul or a way to kill the main villain Daayan, she turned out to be one of the evil force who wants to make Aakarsh fall in love with her. Take a look at her looks below:

While talking to a leading daily, the actress spoke about Vampires and said that Vampires are the most beautiful creatures created by the human mind. They are known to have a charming personality which can attract any person and kill them for their survival. While there is no doubt about the charming personality Aashka has, she personally added a few more elements to this look and made sure that it is the perfect image that comes to anyone’s mind when they think of Vampires. The dry veins and blood red lipstick with all white appearance of the actress truly represent the immortality and true nature of the character.

While other actors think twice before accepting such roles, Aashka takes inspiration from the great actors of Hollywood such as Tom Cruise, Brad Pitt and Antonio Banderas who have once portrayed the character of a Vampire. She feels that playing such a character is a part of learning and not any next door face can play this role as it is challenging to live up to the expectations of the audience.

After being in the industry for 16 years, the actress makes sure that she follows what she likes and doesn’t give a thought about others opinion. Be it beauty or health, when it comes to making choices, Aashka is the perfect inspiration for all those who wish to achieve what they want to live their life in their own way.

Did You Know Emraan Hashmi's Tigers Is Inspired By A Real-Life Incident?