Aasif Sheikh: I’ve Played 200+ Roles But Vibhuti Has Been The Character Of A Lifetime!

“Salaam sabko, thank you so much, I love you all.” The Bhabi Ji Ghar Par Hain actor gets emotional talking about the show, his fans and his career. 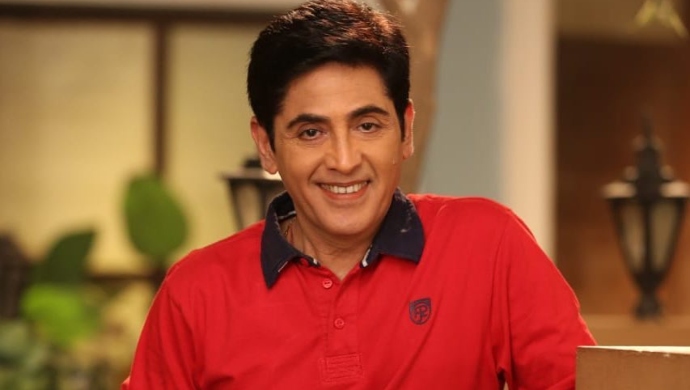 We dare you to find a character funnier than Vibhuti Ahuti Narayan Mishra from the &TV show Bhabi Ji Ghar Par Hain! For the past 5 years, portrayed so seamlessly by Aasif Sheikh on-screen, Vibhuti is Anita Mishra’s husband, but obviously cannot stop flirting with Angoori bhabi, the naive and dumb wife of Manmohan Tiwari. Vibhuti claims to be a “Chhapra University topper” but is often called “nalla” for being jobless and always at home! He loves poetry and tries to woo Angoori bhabi by reciting shayaris in Urdu and Hindi. With such a colourful role to play, he celebrated #5SaalBemisaal of the show with its cast on 2 March 2020, on the set in Naigaon, Mumbai. After cutting the cake, in a candid interview, he shared what has kept him and the show going:

1. How would you define your journey of 5 years on Bhabi Ji Ghar Par Hain?

See, there’s first-class, there’s business-class and then there’s economy-class. I’d say, for 5 years, I’ve only travelled in first-class with the show. My journey has been fantastic! Whatever little fame and name I’ve earned is because of this show, even though I’ve been working in the industry for 25-26 years.

2. If given a choice, would you ever want to behave like Vibhuti Narayan in real life?

Ya, why not! Vibhuti is a flamboyant character and the best thing about him is that he gets away with everything. It’s his USP and I’ve lived my character with utmost fun. In fact, I’ve played 200-300 roles, but Vibhuti has been the character of a lifetime!

3. What is the best part about being on set and shooting for Bhabi Ji Ghar Par Hain?

Every day is a new and different day for me on set. I don’t get bored playing Vibhuti at all, because he is up to something or the other. One day he’ll be bald, the next day a thief, or a police officer on the third day! It’s very exciting to come and play him with all my co-stars.

I love comedy! But I hate to do daily soaps, which is why I hadn’t taken up any in the past. This is my second daily soap ever and I did it only for the comedy. I have fun performing in the genre because it’s spontaneous and witty. I like putting my brain into the character I do and comedy has a lot of scope for improvisation. I really enjoy it!

5. What has been your favourite or funniest moment through the 1300 episodes?

I can’t point out one moment, but a lot of times it so happens that we cannot stop laughing in our own shots! We keep retaking 10-12 times and still laugh at one another’s dialogues. It makes us realise how much we enjoy shooting together. We appreciate each other’s work. And we’ve got through these 5 years just by laughing and playing on set!

6. We see that you love wearing different/unusual costumes. What’s your thought process behind them?

My love for it comes from my theatre background, which has paid me off in life. Acting on stage has proved to be a benefit and advantage for me. And most of the ideation for these unusual characters comes from Harshada Potnis, our creative head. And with our director, I’d say we have the best team on television.

7. What is one thing that motivates you to come on set and perform every day?

I am always motivated. First thing I look forward to is the scene. I love to read the new scenes every morning that our writer Manoj Santoshi pens down. He breaks the monotony with his lines and I enjoy delivering the unique and funny dialogues that he gives us!

8. Out of the two female lead characters, who do you find more exciting: Angoori or Anita?

Both of them are brilliant in their own way. Angoori is rural and rustic, whereas Anita is classy and elite. So I gel very well with both the characters and their actors. These are two different and fun roles that I get to interact with.

9. What kind of fun and frolic do you have with the entire family of Bhabi Ji Ghar Par Hain?

Oh, you haven’t seen on set really! We have a lot of fun together making mischief with each other. Our TMT (Teeka, Malkhan, Tillu) making us laugh so much. We have food together on the set and spend time in each other’s rooms. We share great chemistry and have developed a camaraderie over the 5 years. Basically, we live together!

10. 8 March 2020 is International Women’s Day and this show represents two different kinds of strong women. What message would you like to give out to the audience?

Well, I support women empowerment. Now, women are getting out of their shells and making a mark for themselves. As males, husbands, brothers, etc., we should support them in every way to push ahead in their careers. Gone are those days when a woman used to only cook at home. Today, she can fly a plane and do so many things that are equal to men!

11. What would you like to say to your viewers/fans as Vibhuti Narayan Mishra?

Friends, not fans! I interact with them on a regular basis. And I would say that I’m grateful for all the love that you have been showering on me. Please continue to watch us in the show with loyalty and to love our work. Aap hain toh hum hain! This show has been a huge hit only because of you guys. Salaam sabko, thank you so much and I love you all!

Ajo Of Mentalhood, Nandita Of MOM: Loud And Embarrassing Parents On ZEE5…

Don’t miss your daily dose of laughter from Aasif Sheikh aka Vibhuti Narayan and keep watching all the episodes of &TV’s Bhabi Ji Ghar Par Hain streaming on ZEE5!

Watch 'Happu Ki Ultan Paltan', a spin-off of the &TV show on ZEE5!

5 Terror Attacks That Shook India,#StateOfSiege2611 Is One Such Tribute To Fallen Soldiers