Luv and Kushh leave no stone unturned to save Vaanar Raj's magical mantra of power from Sarp Raj. Watch the animated movie about good over evil 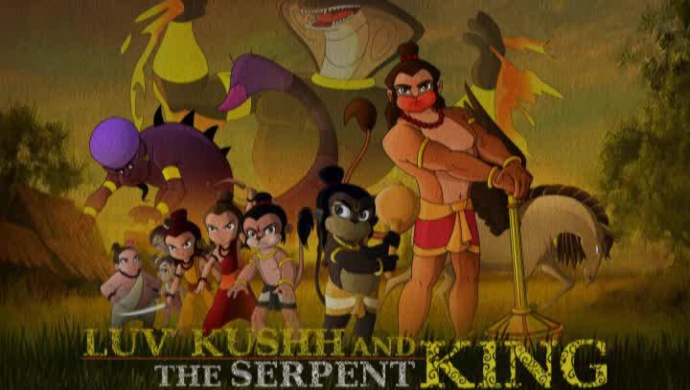 While you’re safe and sound at home, ZEE5 KIDS has ensured to kill your boredom with a bunch of animated movies that you can binge-watch. Experience unique stories of comedy, mythology, mystery, fantasy, and much more to have #NonStopBachFUN with your family. Luv Kushh: The Serpent King is an animated movie that revolves around the principle of good over evil. Twin sons of Lord Ram and Sita make sure that they do not let Sarp Raj have the magical mantra of power as its rights are solely reserved with Vaanar Raj. Read on!

Deep down in an ocean lives Sarp Raj, the serpent king who is obsessed with power (megalomaniac). Along with his crab servant, he goes to the rear end and finds a red glowing ring. In greed, he grabs it only to realise that it is filled with magical powers, and in a tornado, all his belongings get sucked into the ring, including the king’s crown. Through the ring, Rakshak appears and declares that no one can have the sarva-shakti mantra of the ring because only Vaanar Raj Bali is entitled to be all-powerful.

The high headed Sarp Raj is not someone who would concede easily. His blood boils with rage as he plans strategies to get to the Vaanar kingdom. In Valmiki’s ashram, Luv and Kushh learn that Vaanar Raj Bali’s son Babbu’s life is in danger. At his court, Bali announces that Babbu will be appointed as the new heir of the Vaaanar kingdom. Bali anoints Babbu with his trishul for his rajya-abhishek. When Sarp Raj decides to send his messenger and kill Bali, Babbu learns the news from a bird flying in the sky.

Babbu goes to the forest to investigate and gets kidnapped instead. Bali pleads Luv-Kushh to go and save the future king. The twins, Nandu, Ugra, and others swim to the depths of the ocean, and reach Sarp Raj’s kingdom. Entering the cave, they encounter a cloud monster who is pinned down and defeated by Luv like a piece of cake. Then, they follow the trail that Babbu had drawn out with his favourite food for his friends. On reaching Sarp Raj’s court, they see an extremely horrified Babbu.

With Hanuman by their side, Luv and Kushh have a face-off with Sarp Raj. Babbu had already met Hanuman along with Sugreev. When Sarp Raj tries to attack Kushh with his trishul, Luv sets the cave ablaze by shooting an arrow of fire. Hanuman battles other demons present in the outer area. Babbu and Luv run at top speed, and pounce on Sarp Raj. Kushh also draws his sword at the same time. Showing strong unity, Luv-Kushh aim a final attack at him, and knock him off. The Vaanar kingdom is indeed in safe hands.

Mother's Day: Tips On Modern Parenting From Meira, Diksha And Aakash Of Mentalhood