Anisha Victor: My Character In REJCTX 2 Is like Kiara 2.0, Better And Bolder

Anisha Victor talks to us about shooting for REJCTX 2 during the coronavirus scare, says, fans will see a happy, sweet and in-love version of Kiara 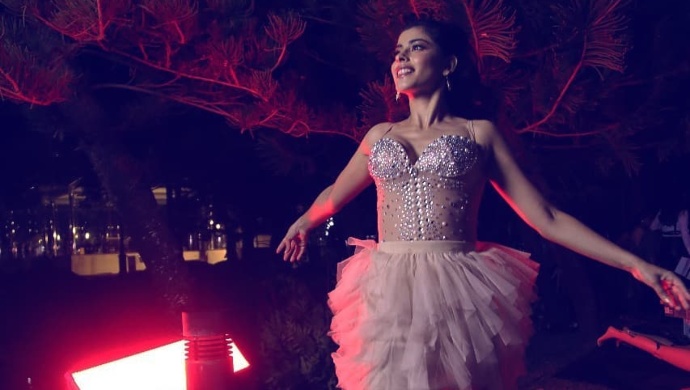 In the upcoming series REJCTX, Anisha Victor who plays the role of Kiara is set to show a different side to her character. Before making her film debut in 2017, Anisha already worked with talented actors like Ronit Roy and Abhay Deol, in the film, Line of Descent that was released in 2019. Her claim to fame is the high-school drama, REJCTX. Before the bolder and better season 2 of the show is set to release, she tells us why it is not only a relevant but also important series for our current generation of youngsters.

Watch the trailer for REJCTX 2 here.

1. Congratulations on getting the second season out on time despite the Coronavirus lockdown? How did you make it happen?

It really was quite something. The shoot was supposed to go on till 24th March. On 19th, we got the news that India is going to stop all international flights from 22nd. Goldie (Behl) sir had this meeting where he told us all what had happened. He told us that we would not be able to come back and shoot after the lockdown ends so we will have to shoot the last 3 days schedule in 2 days. We started shooting on the 19th night, and we shot almost all day and all night, packed our bags and took the flight home. We touched down in India 10 minutes on 22nd midnight, before all flights were stalled.

2. How excited are you for the new season, and what can fans expect from your character in the second season?

So my character in this season is like Kiara 2.0. Because obviously you have to better yourself in every season.The plot itself is much more engaging and entertaining and it has really outdone itself. All the characters have done well; we are all 2.0 versions of ourselves. I mean, in the first season Kiara was vengeful, she hated Aarav because her parents sent her to the school, only to woo him. As the show progresses, she realises that Aarav is not a bad guy at all, and falls in love with him.

In this season, I am already in love. Fans will get to see the sweet, head-over-heels in love and happy side of Kiara now which is very different from how the character was earlier. I am in love and mellow and not so bitter. I have gotten so many DMs saying this time the show looks amazing and they liked my character.

3. What were the kind of responses you got for your character in the first season?

It was really nice, because even though the first released in July 2019, I still get DMs saying they loved my character. A lot of people were messaging me last year saying they cannot wait for season 2. At that time we didn’t even know if there was going to be a season 2. This time from the trailer itself, everyone has been sending positive reactions. I haven’t received a single negative message for this season.

4. How did it feel returning to the sets this time?

Because we were shooting in the same locations, with the same people, It felt like I never left. The crew and co-actors were a little different, but everyone got along with each other very well. This time because of the virus, we had to take extra precautions. There were hand sanitizers everywhere. We even got immunity shots one day, Goldie sir arranged it for us. Because we were interacting with the local crew in Bangkok, who would go to their homes and come back on set, so you never know who might be carrying the disease. Thankfully, nothing bad happened, and we took the necessary precautions, so it was all good.

5. Do you feel shows like REJCTX become more important after seeing incidents like ‘Bois Locker Room’ ? Because Parents don’t know what their kids are up to. Kids don’t understand the kind of dangers they are exposed to.

Definitely. I think it is important to bring these issues to light. Because for years now people, especially boys, think they will get away with their actions. It’s time for people to be held accountable for their actions. I genuinely hope this show helps people realise that it’s not okay to be a bully, or it’s not okay to speak about women in such a demeaning way. It’s really not. I hope this show brings some change.

6. People criticised the first season of REJCTX for showing the lives of privileged kids. Do you think the entry of officer Rene who takes on the ‘privileged kids’ is a response to that criticism?

I’m sure, that’s what it seems like from the trailer. However, Officer Rene (Esha Gupta) is not someone who has interacted with the characters. She doesn’t know what each student’s struggle is. She is on a mission to find out the killer of Anushka Rao, and she ends up learning more about the children. She only judges us from the fact that we go to a fancy school, and have rich parents. What she doesn’t realise is that money will only help you in certain things, and your mental health is not one of them. So I’m not sure if she is a response to those comments, because she feels like part of the story itself.

7. Since the series is all about music. Which is your favourite song from Season 1 and Season 2?

In the first season I loved the song Kya Gaaye which Aarav and I performed. And in the second season I love the song Ranjhana. It’s such a lovely romantic song.

8. You’re also a singer and we’ve seen clips on Instagram. Did you even consider singing on the show?

They did approach me, and Goldie sir suggested I try and sing. I have bronchitis and I catch cold easily, so my voice is not consistent at all so I wasn’t sure at all. I like singing, but I also ruin songs just for the fun of it. For ‘Kya Gaaye’, I changed the lyrics to ‘Kya Khaaye’, and I spoilt the song for everyone.!

9. Ahmed Masi had mentioned that all the characters on the series are somewhat like they are in their personal life. What are the 3 qualities you have in common with Kiara?

I don’t agree with him, first of all. I mean we might have become like the characters after playing them for so long. What I have in common with Kiara, is that we are both headstrong. One quality that I really love about Kiara, is that she is really strong, but when someone opens up to her she just melts. I too empathise with people a lot. One thing I don’t have in common with her, is that I am not that vengeful at all.

10. With which co-star is your equation, exactly like we see on-screen?

With Misha (Pooja Shetty) I have a great equation. We are best friends on the show, like I help her when she gets drunk, etc. and we are close in real life too. She doesn’t drink actually, but we are always there for each other.

11. Since this season is hotter and bolder. Can you name 3 of your hottest co-stars on the sets of REJCTX?

Can I take names from both seasons? Firstly Esha Gupta, because she has really raised the glamour quotient on the show. Secondly, Kubbra Sait, because she looked amazing on-screen, and she is equally great off-screen too. Thirdly, Ayush Khurana, because he really works on his body a lot and it definitely shows.

12. You made your debut in 2017 and have worked with talented people like Ronit Roy, Abhay Deol, Esha Gupta, Sumeet Vyas, and Goldie Behl. Could you share one advice that you got from them that really stayed with you?

From my debut film, I learnt a lot from Atul Kulkarni, who plays my father and Siddharth, who was the producer. From Atul Kulkarni, I learnt how to add layers to my role, and he gave me a lot of good advice. On the sets of Line Of Descent, I hung around with the director Rohit, and I asked him how he was so calm and cool, even when things weren’t going his way. He said that he wanted to make films all his life, so why would he be angry even if things didn’t always go his way, because he is living his dream. And Goldie sir of course, he is such a fun person to be around. He will always laugh and talk but every now and then he will take you aside to talk to you and tell you to get your act together.

It was a great feeling to watch that film finally release. Everyone watched the film at home, including my mother. It was a long wait for sure, but it was worth the while I think.

Watch Anisha Victor in the second season of REJCTX releasing on May 14, 2020 on ZEE5.

Looking Back At The Hottest Couples From Season 1 Of REJCTX

Asha Negi Opens Up About Kissing Scene in Baarish 2; Other Actors Who Went Bold On-Screen