Anveshi Jain On Art Of Seduction, Gandii Baat And Her Audacious Role In Who’s Your Daddy

"It's not some strategy for me to talk about sexual desires, it's just who I am," Anweshi Jain shares her unapologetic opinions in this interview. 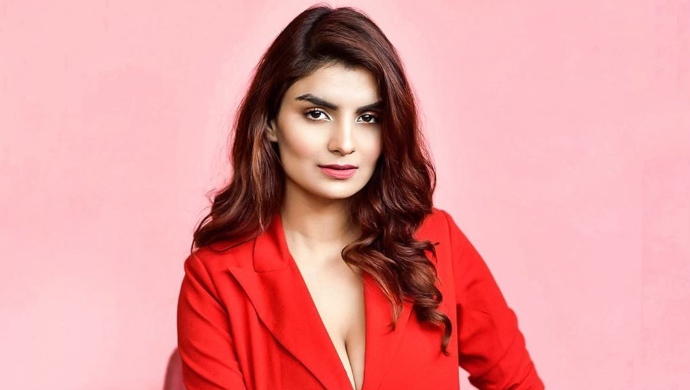 Anveshi Jain has been keeping herself busy. She started her own app which has been keeping her busy during the lockdown. She admits she wouldn’t know what to do if she didn’t have her app. She rose to immense fame after her appearance in the episode of Gandii Baat and will play a vital role in the new series Who’s Your Daddy along side co-actors Harsh Beniwal and Rahul Dev. She talks to us about her roles in both the series and an important message to young girls who are being misled by casting directors in her name.

Watch her in the trailer for Who’s Your Daddy here.

1. Can you tell us more about your character in the show?

I’m playing the role of a divorcee named Chibber. She left her husband because he cheated on her. Now she is independent, not just because she can pay her own bills but also she chooses the men she wants to be with. This is the kind of life she wants her friends to live too. She doesn’t follow society’s norms for what is good or bad for her as a women. She wants to find a guy and settle down but till then she doesn’t feel anything wrong in fulfilling her desires.

I had a great moment during the shoot that I remember with Rahul Dev. There’s a scene were his son, Soggy, is arrested. I comfort him and promise to try and get his son released. That scene were we wipe each other’s tears was really sweet. This series is also the first time I was shooting with three women and the director did a wonderful thing to make us bond with each other. He called us one day to his office and asked us to just talk to each other.

This was so helpful to us because we realised that we are a lot like the characters and we were cast perfectly. Like Das (Kasturi Banerjee) is all about her kids on the show and in real life. We became very close friends and after the shoot was over we went to party together as well Lizaa Malik, Kasturi Banerjee and me. We are still in touch and we video call each other from time to time.

3. What should audiences expect from your character in Who’s Your Daddy?

To be honest, because it is ALT Balaji and because it is me, people are expecting a lot of hot scenes and hotness. That’s their driving point and there are scenes where I’m wearing a cool dress. I think audiences will like seeing me in sarees too. Apart from that, I think with every project I do my acting improves and I hope the audiences appreciate that as well. Also, people will relate to my character because that’s how Delhi aunties are.

4. Would it be fair to say that Gandii Baat was a turning point in your career?

It did. Gandii Baat completely changed my career.

5. Can you tell us how much your career has changed with that show? How has it been since then?

So I really want to get this message out to young girls and casting directors. The thing is there are casting directors are misguiding young girls with my example. They convince them to shoot bold scenes by saying do this scene and your career will take off like Anveshi’s career after Gandii Baat. Oh my god! You have no idea how many screenshots I’ve been getting of such conversations and it upsets me.

I am glad you asked me how that role changed my career. I want to make it clear that I am not an overnight success. Gandii Baat help put me in the limelight. But then after that how to stay in the limelight, how to use that limelight to make a real impact, all of these come with good planning and decision-making which not everyone understands.

It’s not even just Gandii Baat because that happened a year ago and I am still doing okay. I was able to use that chance because I have been working hard for so many years before that too. I have been selective about what I want to do as well. I would not do something like Gandii Baat again if I didn’t find anything new in it to explore.

6. You are popular for characters who are open about their desires or talk openly about sex. How do you deal with the unwanted attention that comes with it?

To be honest, unwanted attention doesn’t bother me because I don’t pay attention to it. It doesn’t affect me and it only gets me more curiosity and more fame. So whether they are forwarding my pictures or making memes it’s only making them wonder what this woman is all about. It’s not some strategy for me to talk about sexual desires, it’s just who I am. Like I wouldn’t call myself a feminist and say women are in a bad shape in the world. Because you cannot fake these things.

The reason I talk about the art of seduction and Kamasutra on my app is because I think it is important to know. When Vatsyayana wrote Kamasutra it was not because he wanted to have sex, it was for women rights. People used to think sex was for men, and women could not derive any pleasure from it. When he wrote it people found out that women have desires and it should be fulfilled too.

It wasn’t my idea to play the role of a sexologist earlier but it came to me and I liked the part. However, if you ask me what roles I want to play, I would love to be a part of a psychological thriller and I want to play a con artist.

7. What are few things you wished people notice about you?

Whenever I meet people they ask me to give them my PR number. They say whoever is handling your Instagram account is doing such a great job of it. I’m like I handle my own Instagram account. People don’t expect women like me to have a business acumen and strategy. Other than that I have been blessed because people have given me enough love for my work.

In fact when I started my app I thought it would be only about my appearance because I was going live everyday. I thought people will only want to see my cleavage and I’ll have to wear short clothes. I do that because I know what they want and try to get them to see what I want. I found that it takes time but eventually people will begin to pay attention to the right things.

9. Name 5 reasons why people should definitely watch Who’s Your Daddy on ZEE5?

Well, firstly this show has parallel storylines. I haven’t seen and Indian series that connects parallel stories so well. Secondly, the series will keep you guessing till the end. With every episode you will be guessing who is the father and mother. Thirdly, you will relate to the character played by women in the show. Fourthly, there are two wonderful songs in the show and one of them is a party track. Fifth is Rahul Dev because you’ve not seen in him in such a Rangeela andaaz in any of his other work.

#StateOfSiege2611 Gets A 9.7 Rating on IMDb, Lauded For Its Unflinching Portrayal Of 26/11