Popular youth sensation Armaan Malik won the award for Best Male Playback Singer at DPIFF 2020 for the song Chale Aana and dedicated it to his mother. 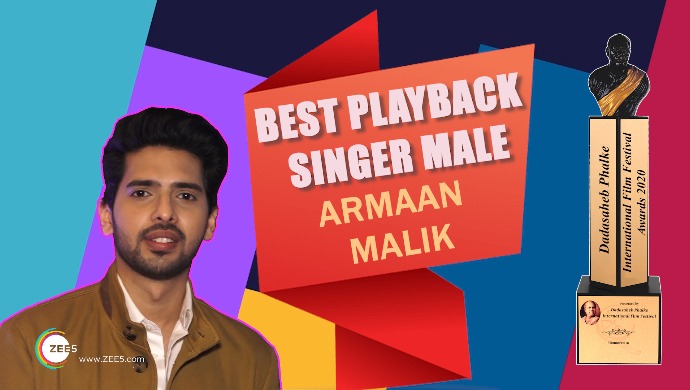 Popular youth sensation Armaan Malik won big at Dadasaheb Phalke International Film Festival 2020. The singer won the best playback singer (male) award for his song Chale Aana from the Ajay Devgn-starrer De De Pyaar De. Armaan looked dashing in a white shirt paired with a brown jacket and black jeans. The handsome hunk kept his style casual yet trendy. In his acceptance speech, Armaan said, “This is my third award, and for me, it feels surreal every time as I think it is the most prestigious award one can receive in the film industry.”

He also said that the awards remind him to work even harder. He acknowledged his mother’s efforts behind his successful singing career and dedicated the award to her. Armaan even sang a beautiful song for his mother, Mein Hu Hero Tera. The singer left the audience spellbound with his enthralling performance and overwhelmed by his heartfelt speech.

Armaan started his singing career in the singing reality show Sa Re Ga Ma Pa L’il Champs in 2006, where he was a finalist. He made his debut in film Kaccha Limboo in 2011. Within no time, Armaan gained a lot of popularity with his soulful voice and won millions of hearts with his charming personality. Apart from singing in the Hindi film industry, Armaan even judged the reality show The Voice and became the youngest judge in the history of Indian singing reality shows. Billboard announced Armaan’s first English single under Arista Records, Control, in March 2020. The singer also has a huge fan following on social media.

See What Shabir Ahluwalia, Sehban Azim, Hina Khan And Others Are Doing During Quarantine