Anuj's mothers suffers a mild heart attack and Gauravi rushes to the hospital. Anuj finds out about it only after his English speech is a success! 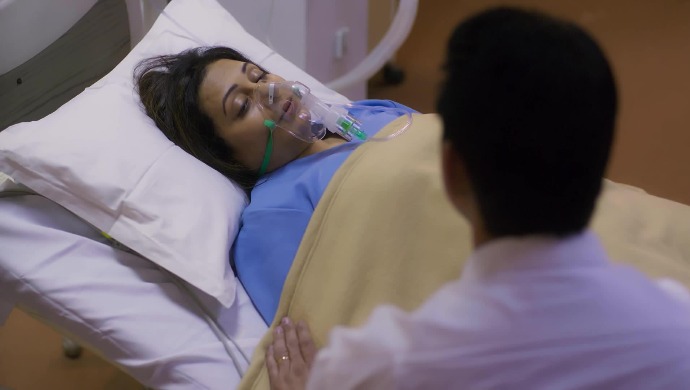 In the previous episode of Baarish, Gauravi gets shocked to see her younger sister Asmi walking on the ramp as the show stopper. She gets tensed but Anuj makes her comfortable. Rishi plans against Asmi and decides to take revenge on Gauravi. As Asmi walks the ramp, she faces a wardrobe malfunction. Anuj rushes to her and tries to calm her down. Later, Gauravi thanks Anuj for supporting her sister in such a crucial time.

In the latest episode, Asmi tells Gauravi that she is glad Anuj is her brother-in-law as he takes care of the entire family. Later, Gauravi remembers how Anuj protected her family. She remembered Anuj got a call from her father and he lied to her saying that he was concerned about him. Gauravi gets angry as she wonders why her father called Anuj instead of her. Anuj makes Gauravi smiles as he says that he feels that he has got his father back. Gauravi misses the time she spent with Anuj.

In the morning, Gauravi rushes to go to the temple. She tells her mother that Anuj will address the press in English and gets excited for him. Anuj is tensed and panics. Gauravi wishes Anuj luck and motivates him to do better. Gauravi goes to the hospital and gets to know that Anuj’s mother has had a mild cardiac arrest. Anuj nails the conference with his spectacular speech. In the conference, Anuj gives the speech in English and imagines Gauravi and his mother’s presence in the room. After the meeting, Anuj calls his mother and gets to know that she is in the hospital. He rushes to the hospital to meet his mother and gets upset. Gauravi tries to calm down Anuj. He thanks Gauravi for being there for his mother.

What will happen next? Will Anuj and Gauravi come closer? Watch all episodes of Baarish, streaming now only on ZEE5.

Tears Of Joy: 5 Proposal Scenes From ZEE5 Shows That Made Us Laugh And Cry