ZEE5 Original movie Bamfaad releases on 10 April 2020, featuring the explosive debut of Aditya Rawal and Shalini Pandey. Read on for a review! 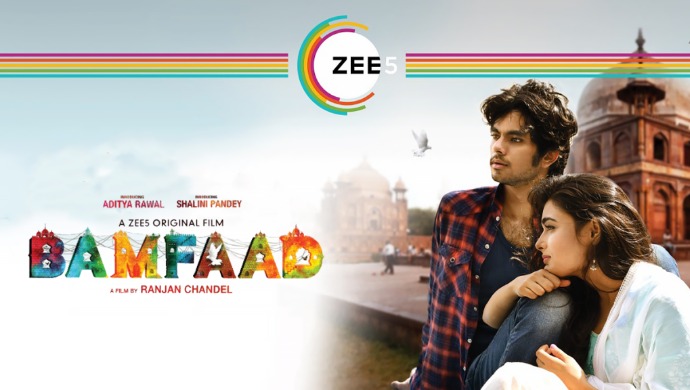 Bamfaad is an upcoming ZEE5 Original movie that will feature Bollywood actor Paresh Rawal’s son Aditya Rawal and Shalini Pandey, the lead actress from Arjun Reddy. The two actors will be making their debut in the Hindi film industry. Bamfaad is a love story based out of Allahabad. Directed by Ranjan Chandel and presented by Anurag Kashyap, Bamfaad will be released on 10 April 2020. Kashyap has said that the term ‘bamfaad’ is North Indian slang for an explosion, which is the perfect terminology to allude to his lead pair.

The movie Bamfaad starts on a college campus in Allahabad, where students are giving their exams. Actor Aditya Rawal, who is essaying the role of Nasir Jamal in the show, plans to cheat. The college administration catches them red-handed. Nasir friends call him ‘Naate‘ despite being the tallest in the group. His parents scold Nasir for receiving constant complaints from the college for his mischief. Nasir’s father is a well-known contractor and has a good reputation in society. He does not take his son’s complaints seriously, and thus, Nasir is free to do more mischief.

One day, Nasir meets a girl called Neelam. Destiny brings them together more often and eventually they fall for each other. Neelam seems a bit reluctant to express physical affection for Nasir, which he does not take it seriously. Nasir sees Neelam with Jigar Fareedi, an influential boy, and loses his cool. Neelam tells him that Jigar is important for her. Jigar plans to send Nasir to jail and calls Nasir’s close friend Zahid. He tells Zahid to do something about Nasir. Zahid sees this as an opportunity to get close to Walia, who is the love interest of Nasir’s friend Tota.

Nasir is shown as a loyal friend who can go miles to get what his friend needs. One day he gets into a fight with college student politician Rajeeb Mehndi who tries to impress Walia. Nasir gets into a physical fight with Rajeeb. During the Holi festival Jigar calls Nasir to meet him. He tells Nasir about his fight with Rajeeb and asks him to apologise. But Nasir refuses to do so and Jigar warns him to not enter the college.

Neelam informs Nasir that she has been in a relationship with Jigar for the past four years but their bond has faded with time. She tells him that she wants to end things with Jigar and wants to be with him instead. Nasir gets into a fight with Rajeeb and his boys. In anger, Nasir shoots Rajeeb and he dies. When Jigar gets to know that the gun from which Nasir killed Rajeeb was in his name, he tells Zahid to find the gun. Nasir and Jigar come face to face and the former points a gun at him. Jigar sends notice to Nasir’s father and tells that he has been ordered to conduct an encounter against his son. Nasir gets to know that his mother passed away. Suddenly, Jigar’s men attack Nasir’s father and kill him. What will happen next? Will Nasir take revenge from Jigar for abducting Neelam and killing his father? Will Jigar snatch Neelam from Nasir? What will happen next? Well, the movie has so far kept us hooked with their mystery.

Most riveting in this love-hate plot was the chemistry between Shalini Pandey and Aditya Rawal. Right from their innocent love to their verbal wars, everything is just perfect to its core. Even between the gun shots, abuses, fight sequences and chases, Neelam and Nasir’s love story does not lose its plot. It is very rare to find such a beautiful debut pair onscreen. Apart from the lead actors, the supportive cast have given exceptional performances in the film. The supporting cast has managed to keep us engaged with their powerful acting and perfect delivery.

The storyline and cinematography of the movie reminds us of Ishaqzaade which features Parineeti Chopra and Arjun Kapoor. The story was about two rebellious individuals who belong to two rival political families. Zoya and Parma fall for each other and their families set out to kill them. Neelam and Nasir’s love story was quite similar but has its own charm. The movie is a must watch and sheds light on the magic of true love.