With Vibhuti's help, Happu manages to nab the thief who added chemical to the colours. Saxena finds an oil that will get the colour off their faces. 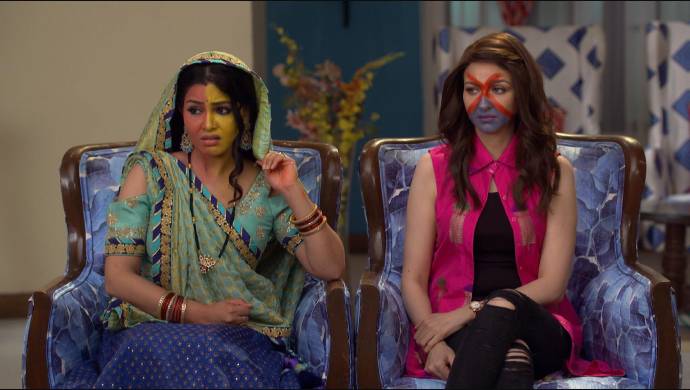 In the previous episode of the show, we saw how Vibhuti and Anita danced to a Bollywood number and left everyone awed at their performance. Everyone celebrated Holi by smearing color on each other’s faces. Later on, they realized that they were promised herbal colors but were actually given chemical colours as the colours would not come off their faces. Anita and Angoori are most distressed and blame their husbands for the goof-up.

In today’s episode, we see how Saxena dressed as Saxeni dances with Happu as everyone sings Holi songs. Happu visits Vibhuti’s house and tells everyone that he is trying to find the culprit. Anita tells him that he should have found a solution to their problem by now. But the constable Makwana tries to console Vibhuti by saying that the latter would not be punished if he gave his case to Makwana’s wife. Happu silences him by saying not to make such advanced statements at this point in the investigation.

Teeka, Tillu, and Malkhan are both depressed that the father of the girls they like will not recognize them. Doctor asks them if they haven’t bathed after playing Holi and they say that they must have bathed around 50 times. Later, Saxena comes and dances for them. Meanwhile, Angoori bhabi is angry with Vibhuti and tells him that she hates him. Vibhuti runs away as soon as he hears the siren of the police van. He visits a person who sells a chemical which makes the color stick to the face and asks Happu to question the man.

Everyone sits in Vibhuti’s house and blames the person responsible for the permanent coloration on their faces. Happu manages to nab the thief who had mixed the chemical in the colors. But Saxena comes with a solution for the permanent color. He gives them an oil which he claims will help them. They all use this and the color fades away. We see Manmohan and Angoori spending some time together and Vibhuti also spends some time with his wife Anita.

In the next episode, we will see how the government has imposed a tax called BST, or Bhabi Service Tax. If anyone wants to talk to Bhabi ji, they must pay 1000 rupees per minute! Angoori will be seen protecting Vibhuti while Manmohan ends up paying 2000 rupees.