A new tax by the government has ruined the lives of the men at Modern Colony! Find out how! 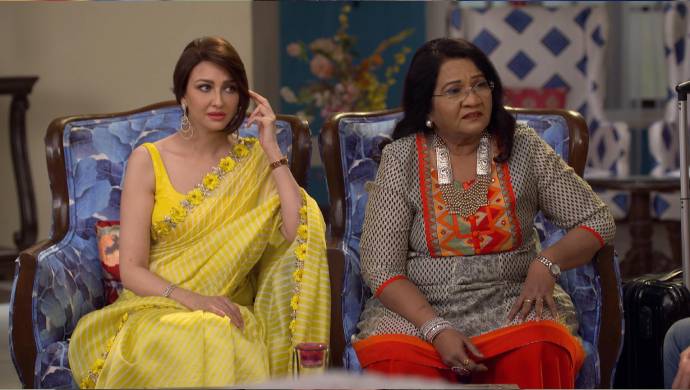 In today’s episode we will see how Anita is miffed by Vibhuti’s antics and ends up telling him that he is very negative and even his mother and his entire family is negative. Vibhuti asks her why she is insulting him to which she replies that it is because she feels like doing so. Vibhuti taunts her saying that women do whatever they want, to which Anita replies that all men are the same. She ends up telling him that men have a lot of time to waste, just like how Manmohan walked to their house in the morning and bored her to the core!

On the other hand, Manmohan is annoyed as Angoori continuously watches weird Bhojpuri songs and films. Angoori tells him that Vibhuti has asked her to watch them and Manmohan ends up scolding her. As they switch to news, they realise that a new tax has been released by the government for the safety of women. BST or Bhabi Service Tax is a payment every man must pay for talking to any Bhabi. If a man talks to his Bhabi for a minute they would recur a 1000-rupee fine for it!

Vibhuti is distressed at the thought of incurring BST while talking to Angoori, The next day, Vibhuti tries to talk to Angoori but is stopped by the government official and walks away without having a conversation with Angoori! He goes and complains about it to Anita who is happy about BST. Vibhuti tells her that this tax should also be applicable to women and that would make the government stinking rich! Meanwhile, Manmohan incurs a 2000-rupee fine for talking to Anita for two minutes.

Happu tries to ask a CA about the best methods for investment. But Vibhuti searches for the official and when he finds that the latter is nowhere in sight, he goes and talks to Angoori bhabi. Will he be caught? Find out in the next episode!

Also in the next episode, we will see how Manmohan has to pay a sum of 1,80,000 rupees while David has to pay 22,000 rupees as BST! Find out who they were talking to for this long!

Stream all the episodes of Bhabi Ji Ghar Par Hai only on ZEE5!