In tonight's episode, we see the Model Colony gathered around to celebrate the opening of Vibhuti and Manmohan's shop. Find out the details inside. 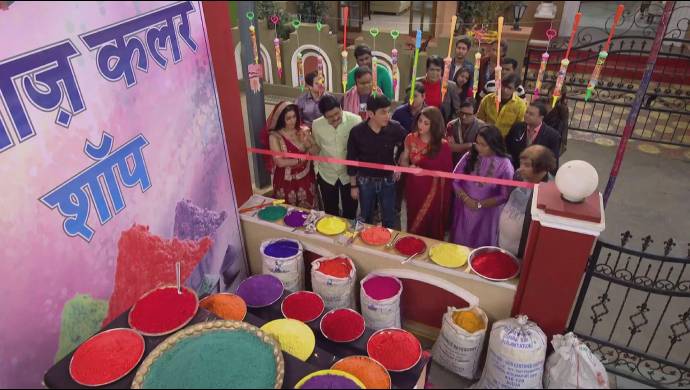 In tonight’s episode of Bhabi Ji Ghar Par Hain?, we see two unknown men planning to ruin Vibhuti and Manmohan’s business. They reach Chhedi’s place and ask for the permanent chemical color that is used in laundry. Meanwhile, David challenges Helen that he will smear her face with the colors of Holi. Helen accepts the challenge and says that she would also apply color on him too.

A while later, we see the Model Colony gathered to celebrate the opening of Vibhuti and Manmohan’s organic color shop. The people wonder who would be given the honor of cutting the ribbon. Amidst the chaos, Vibhuti insists Teeka to cut the ribbon. Helen, Anita, and others are unhappy with this. Vibhuti reveals that he let Teeka cut the ribbon because no one in the Colony cares about him. He then asks everyone to test the organic colors.

Later, everyone participates enthusiastically in the Kavi Sammelan organized in the Colony. Prem humiliates and makes fun of Vibhuti in front of everyone. Malkhan asks Vibhuti to not be angry and let it go as it’s Holi.