Vibhuti ends up in jail for wrestling with a minister who offered them juice to end the protest. 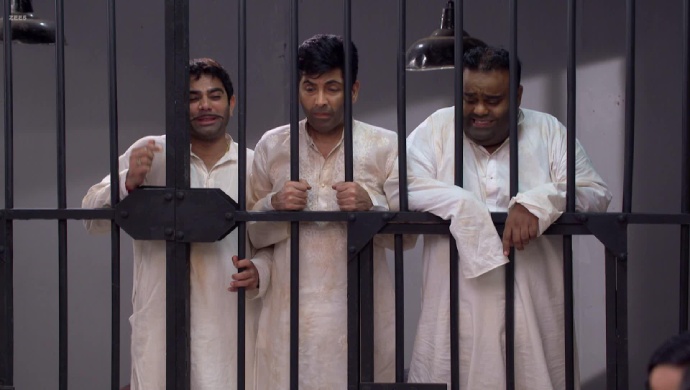 In the previous episode of Bhabi Ji Ghar Par Hain, Daddu ji shows up to support Vibhuti’s protest. However, he ends up asking Vibhuti to end the protest as soon as possible. Tiwari meanwhile plans a rain dance party and forces Angoori to be a part of it. Saxena stops Vibhuti from using or drinking water. The next morning Vibhuti is even more upset after hearing this.

Watch the next episode here.

In tonight’s episode, Angoori is angry at Tiwari for doing a rain dance in front of Vibhuti and his group. Tiwari apologises to her. He says that he will ask his friend to put pressure on a minister to visit Vibhuti’s protest and give them juice to end the protest officially. Angoori is happy to hear this news from Tiwari.

Vibhuti and Angoori go to the police station where Vibhuti and his group are jailed. Tiwari tells Happu Singh that Minister has agreed to release Vibhuti and his men from jail. Vibhuti thanks Angoori and Tiwari for helping him out.

Vibhuti decides to test Angoori by saying he is going to Canada. Angoori doesn’t seem affected by it. Later, Angoori tells Tiwari that she is worried. She tells him that if Vibhuti goes to Canada, Anu will be all alone at home which is not good for her. Vibhuti hears this and uderstands that Angoori doesn’t want him to go.