In tonight's episode, Amma tells Angoori and Tiwari that Pandit Ramphal has asked them to get married again. 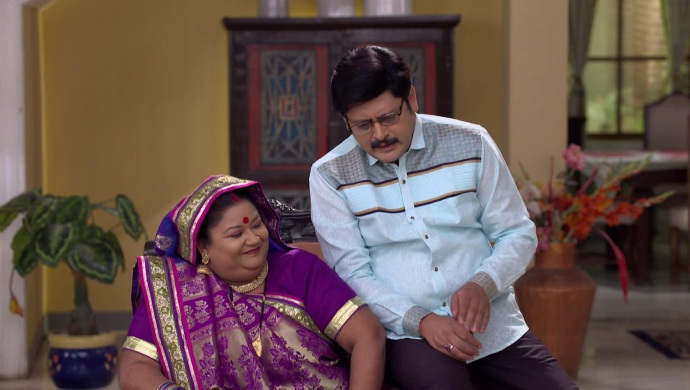 In the previous episode of Bhabi Ji Ghar Par Hain, Tika is wearing red to impress the girl who wants to marry him. She sees Tika and agrees to marry him but Vibhuti sees him in red and beats him up. Later, Saxena predicts that Tika will get married but won’t have a suhaagraat. As the baaraat reaches, Vibhuti sees the bride dressed  in red and kidnaps her.

In tonight’s episode, Happu Singh shows up to register a complain for the missing bride. When he asks Tika if he has doubts on anyone, Tika says Malkhan and Tilu might have kidnapped his bride. Happu Singh takes the two of them to the police station to beat them up.

Amma tells Angoori and Tiwari should get married again according to Pandit Ramphal’s suggestion. She also tells them to get rid of Tika which Tiwari is happy to do. When Angoori is shopping for a red lehenga at home Vibhuti enters and sees the salesman showing her a red lehenga. He attacks the sari salesman and beats him up.

Tika is crying after being kicked out by Tiwari. He goes the police station to remove Tilu and Malkhan. They have been beaten up by Happu Singh and curse Tika. He gets Tilu and Malkhan released but Happu Singh puts Tika in jail instead for making false accusations. Will they catch the real culprit Vibhuti? Stay tuned to find out.