Pandit Ramphal has warned Tiwari and Angoori of the impending danger. What's going to go wrong? 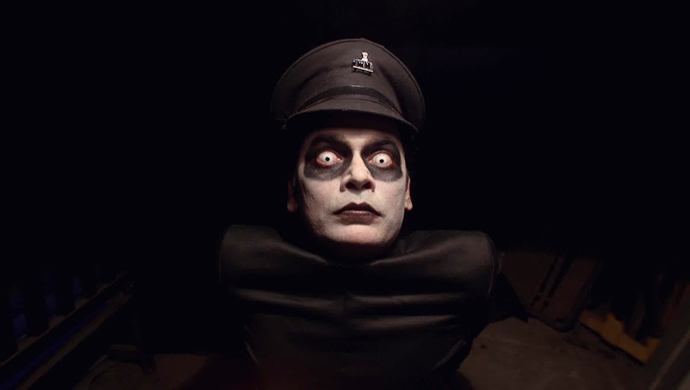 In today’s episode of Bhabi Ji Ghar Par Hain we saw the teacher travelling in the train and while passing from a station he sees a ghostly figure dressed as a ticket checker. Looking at him the teacher gets scared.

Next day, Vibhuti comes to meet Angoori Bhabi and tries to flirt with her. And she doesn’t understand it as usual. While both are talking, Tiwari comes into the picture and starts insulting Vibhuti. He then asks Vibhuti to deliver a parcel of Kachha Baniyan which Vibhuti rejects. Both of them then start fighting over the same. Angoori then tries to calm both of them down and requests Vibhuti to deliver the parcel to Dumargad. Vibhuti accepts to do so and asks for 3000 rupees in return. Tiwari rejects the amount and both of them finalise the amount of 2000 rupees. Later, Saxena and Doctor come with a device which can locate ghosts and spirits and tell Tiwari and Vibhuti about the device.

Watch the episode below:

In the next scene, we see Anita’s friend Meenal who comes to meet her with her husband Anurag. Meenal then tells Anita that she has come to tell her (Anita) that she has been selected as the captain of their football team. Anita then tells her about leg injury because of Vibhuti. Meenal then suggests Anita to become the motivational trainer of the team and Anita agrees to it.

Tikha, Tilu and Malkhan are seen near the tea tapri discussing why does one apply haldi before their wedding. And three of them come up with many funny conclusions. Later Vibhuti comes near the tapri. Tilu, Teekha and Malkhan see a parcel in Vibhuti’s hands and ask him what is it. Vibhuti tells them its a parcel of Tiwari which he has to deliver to Dumargad.

In the next scene, Vibhuti boards the train to Dumargad and sits opposite to a person who is seen reading a book based on ghosts. Both of them have a conversation over the topic and Vibhuti ignores his talks and doesn’t believe in what he says.

The episode ends with Tiwari’s mother coming to meet and warn as pandit Ramphal has told her that Tiwari and Angoori are in danger.