In tonight's episode, we see the Model Colony enjoying the Holi celebrations. Find out the details inside. 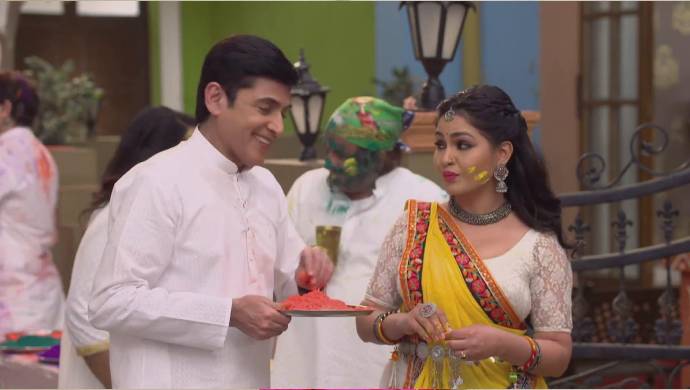 In tonight’s episode of Bhabi Ji Ghar Par Hain?, we see everyone participating enthusiastically in the Kavi Sammelan. Saxena who is dressed as a woman and calls himself as Saxeni, presents a poem too. David cheers and hoots for him excitedly. On the other hand, Manmohan presents a poem, based on David which is appreciated by everyone. Anita likes what Manmohan has presented. Angoori also reveals that she liked Manmohan’s poem although she couldn’t understand a thing.

Later, both Anita and Angoori smear colors on Manmohan and Vibhuti’s face respectively. The entire Model Colony then celebrate Holi with utmost joy. The residents of the colony dance and sing to celebrate the occasion. A while later, David gets up and shakes a leg with Helen. We hear a sound and David suddenly stops dancing. Everyone looks at him in surprise.

In the upcoming episode, we will see the Holi celebrations continuing. Everyone seems to enjoy the celebrations. Meanwhile, Angoori and Manmohan dance it out together. On the other hand, Anita and Vibhuti dance playfully and flirt with each other while celebrating the festival.

Aftab Shivdasani: Poison 2 Has A Great Script With Revenge As Its Central Emotion