In tonight's episode, Kalavati tells Angoori and Anita that Manmohan and Vibhuti are having an extramarital affair which they are trying to hide. 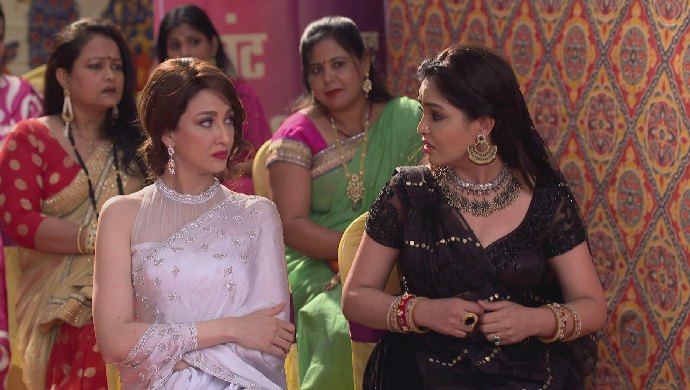 In the previous episode of Bhabi Ji Ghar Par Hain, Prem suggests Tiwari to give money to a goon to threaten Vibhuti. Later, the goon named Rocky meets Vibhuti and threatens him to take his strike back or else he will have to face the consequences. Anita comes there with Tiwari and Prem and asks them to confess their fault. A few moments later, Tiwari gets a call from his business partner who gave him the order. He says that due to some circumstance the order has been cancelled. Everyone gets upset and return to their houses.

In tonight’s episode, Anita takes Angoori to an event organised the ladies who read the magazine Meri Chant Saheli. The owner of the magazine, Mr Kalavati Sharma boasts about how she controls her own husband and keeps him in check. She also calls her husband who is seen working as a waiter at the event.

Angoori asks Kalavati about Manmohan’s habit of saying I love you Bhabiji in his dreams. The latter tells her that Manmohan is having an affair which he is trying to hide. Even Anita gets the same answer because even he does the same. Anita and Angoori decide to find out who is the other lady in the husband’s life. Meanwhile, Tiwari shows a ladies perfume to Vibhuti and says that one of his friends brought it from Dubai.

Indo-China War Trivia: Did You Know Paltan’s Title Track Was Inspired By A…

Later that night, Anita and Angoori feel suspicious when they smell ladies fragrance from Vibhuti and Tiwari’s clothes. Tillu, Tika and Mlkhan start a new business of blackmailing people and call an infamous goon who is known for the inauguration.

In the preview of the next episode, Mrs Kalavati Sharma tells Anita and Angoori that if they smell a ladies fragrance from their husband’s clothes then it means they have an extramarital affair or something even worst.