After delivering the parcel, Vibhuti comes to meet Angoori and starts speaking to her in Bhojpuri accent. 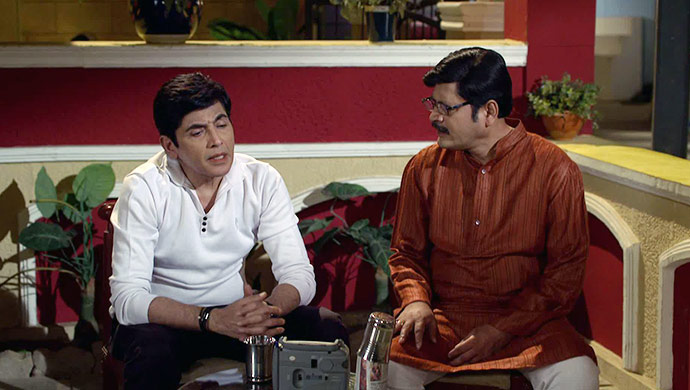 In the previous episode, we saw Vibhuti agrees to deliver Tiwari’s parcel and in return, he expects 2000 rupees. Tiwari agrees to it and Vibhuti is on his way to deliver the parcel. While travelling on the train the train stops at a station and Vibhuti gets down to have tea and goes to the station master to ask if there is any chai wala nearby. But to his surprise, the TT turns out to be a ghost and Vibhuti manages to return to the train.

In today’s episode of Bhabi Ji Ghar Par Hain, we saw Ramkali (Tiwari’s mother) coming to Tiwari’s house and warning them that Pandit Ramphal has predicted that Manmohan and Angoori are in danger. Tiwari’s mother then tells them the solution that pandit Ramphal has suggested to be safe from the danger. Pandit Ramphal suggests them to feed Kheer to two people which must include one corrupt officer and an infamous dancer.

On the next day, Vibhuti returns from the journey and meets Angoori bhabi and starts talking in Bhojpuri accent. While they are talking, Saxena and Doctor comes with the device which can detect ghosts and spirits. The device signals that there is a ghost around when it comes near Vibhuti and Angoori. Vibhuti then slaps Saxena and returns home. Saxena doubts about this situation. Tiwari then meets daroga Happu Singh and Gulfam Kali and invite them to have kheer at his house.

Tika, Tilu and Malkhan come to Vibhuti and ask him for a favour as their house owner has kicked them out of the house and they need a home to stay over. Vibhuti then allows them to come and stay for a night at his house. Happu Singh comes to Tiwari’s house to have kheer. While they are having Kheer, Tiwari’s mother calls Angoori and Angoori put the phone on speaker mode. Amma then asks if the corrupt officer and infamous dancer have had the Kheer; listening to this Happu Singh and Gulfam Kali get angry on Tiwari and go away without having kheer.

Later in the night, Tiwari sees Vibhuti having drinks sitting in his house. Tiwari then comes and asks what happened to his parcel and the payment from the client. Vibhuti ignores his answers, this irritates Tiwari. In the very next moment, Tiwari sees Vibhuti being dressed as a TT. Horrified to see this Tiwari runs back to his home and comes running into his bedroom and tells Angoori about what happened with him while talking to Vibhuti.

How will Tiwari save Vibhuti from the TT’s ghost?

Can you imagine Aliens as Jodi makers? Watch the trailer of Shaadi Ke Siyaape starting from 16th of March on ZEE5.