Vibhuti and Manmohan's promise fails and the Holi colours stick permanently to their faces. How will their wives react? Find out inside! 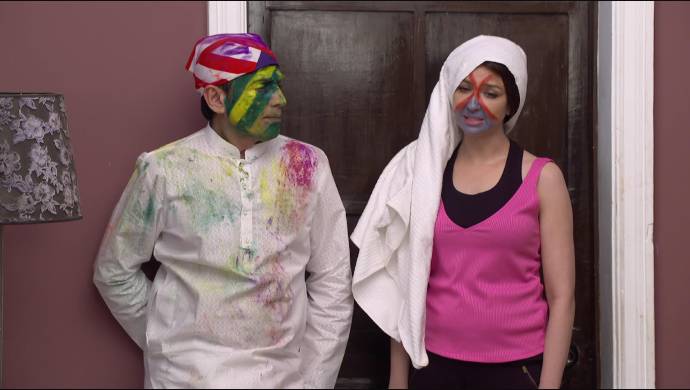 In today’s episode, we see Anita and Vibhuti dancing to a Bollywood number from the Varun Dhawan and Alia Bhatt starrer film Badrinath Ki Dulhaniya. Anita looks wonderful in a white Anarkali dress while Vibhuti is seen wearing a white kurta with stylish glares. After their stunning performance, Angoori and Manmohan take the stage and rock it with their swag and style. When they reach home, Anita and Vibhuti try to wipe off their colours but the chemicals don’t come off even after they are cleansed with soap. This distresses Anita and she tells Vibhuti that the colour would ruin the few modelling shoots that she has. Vibhuti suggests that she should try to remove it with oil.

Meanwhile, Manmohan tells Angoori that the color is still on her face even after she has bathed. Angoori is shocked to see it. Both Angoori and Anita are infuriated as they were promised that the colour would not harm them. On the other hand, Saxena keeps celebrating as Saxeni and dances in front Teeka, Tillu, and Malkhan. The trio is distressed as they know that they will not be accepted by the father of the girls they like.

David, Vibhuti, and Manmohan argue with each other as they all blame each other for bringing the chemical colors. The colours are fixed on their faces and cannot be washed away. Anita yells at Vibhuti and Manmohan as she has lost her modelling assignment. Angoori also blames everyone as she has a half-green and half-yellow face now. Everyone has a distinctly different color on their face. Vibhuti says that someone must be playing a prank on them and they should figure out who it is.

In the next episode of the show, we will see how Angoori bhabi is angry and Vibhuti tries to melt her heart with his sweet words. We will also see that everyone decides to lodge a police complaint about the prank played on them. What do you think will happen next?

Stay tuned to find out! Meanwhile, stream all the episodes of your favorite show only on ZEE5!