In tonight's episode, Prem suggests Vibhuti and Tiwari to go to a 'baba' who will help them solve their problem about their wives' suspicious nature. 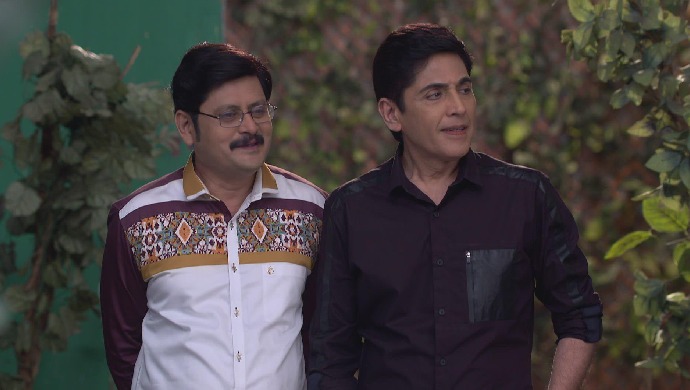 In the previous episode of Bhabi Ji Ghar Par Hain, Anita takes Angoori to an event organised by the ladies who read the magazine Meri Chant Saheli. The owner of the magazine, Mr Kalavati Sharma boasts about how she controls her own husband and keeps him in check. She also calls her husband who is seen working as a waiter at the event. Anita and Angoori decide to find out who is the other lady in the husband’s life. Meanwhile, Tiwari shows a ladies perfume to Vibhuti and says that one of his friends brought it from Dubai.

In tonight’s episode, Vibhuti and Tiwari are discussing Anita and Angoori’s behaviour as they are being manipulated by Kalavati Sharma. A few moments later, Saxena comes to meet them and brings another ladies perfumes and sprays it on Vibhuti and Tiwari.

Knowing the situation, Vibhuti and Tiwari avoid going home and try to find out a solution. Just then, they see Prem Chaudhry doing pooja of a Baba. He tells Vibhuti and Tiwari that he was going through the same problem of his wife’s suspicious nature but then he met a Baba who solved his problem. Vibhuti asks the name of the Baba and takes his scooty to go meet the Baba. Tiwari accompanies him.

5 Things A Pregnant Woman Should Carry Like Ragini From Agnifera

Tiwari and Vibhuti are on their way to the Baba’s ashram when they take a break for tea. There they hear a person talking about the same Baba who was famous for solving men’s problem, was caught red-handed by his wife. Vibhuti and Tiwari decide to return to Kanpur since there is no Baba.

In the preview of the next episode, Vibhuti and Tiwari are see sitting in a car with a lady who has kept both men on gunpoint. Just then, Anita calls Vibhuti and he lies to her that they are with a friend named Ghatotkach Muinuddin Dmello.