In tonight's episode of Bhabi Ji Ghar Par Hain, Anita and Vibhuti try to hide the truth from their uncle but Manmohan makes sure it gets revealed. 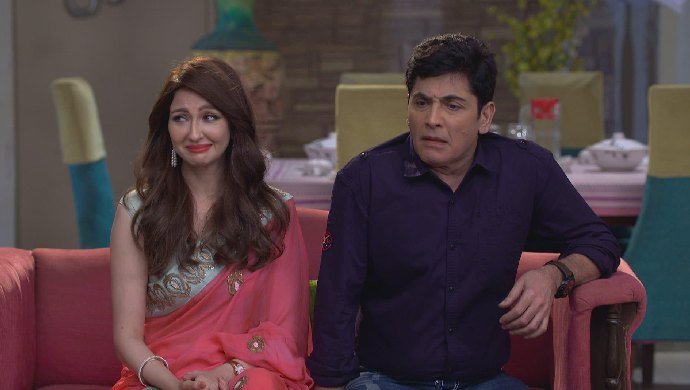 In the previous episode of Bhabi Ji Ghar Par Hain, Tika, Tillu and Malkhan are seen walking in the jungle to catch monkeys. Manmohan meets them and offers them to pay 10,000 rupees if they catch Vibhuti. Manmohan comes to Vibhuti’s house and hints the trio to catch Vibhuti while Anita is not around.  They take Vibhuti to a godown before leaving him in a jungle. Saxena comes there and frees Vibhuti. The moment Vibhuti sets free, he attacks Tika, Tillu and Malkhan.

In tonight’s episode, Vibhuti’s uncle comes from the US to give his property to Vibhuti. He informs Anita that he is afraid of monkeys and asks her to keep them away. Despite knowing that Vibhuti has turned into a monkey, she assures him that there won’t be any problem.

Anita and Vibhuti try to hide the fact that Vibhuti has become a monkey. They ask the uncle to hurry up and take signatures but the latter tells them that he has to go and meet Gulfamkali first. Manmohan sees Vibhuti’s uncle with Gulfamkali and tells him that Vibhuti has turned into a monkey and they are trying to hide it from him. He also gives an idea to take bananas with him and see how Vibhuti reacts to it.

Later that day, Vibhuti’s uncle starts eating bananas in front of Vibhuti which gets him tempted but he controls himself for the property. A few moments later, Manmohan comes there and starts playing Damroo. Hearing this, Vibhuti starts dancing like a monkey. The uncle gets shocked and refuses to give the property to Vibhuti.

After the uncle leaves the place, the doctor informs Anita and Vibhuti that he has got the medicine to treat Vbhuti’s disease.

In the preview of the next episode, Manmohan gets angry on annoyed after seeing the unwanted expenses. Vibhuti and Anita decide to stay away from each other.

This Scene From Paramavatar Shri Krishna Will Remind You Of The Magnum Opus Baahubali!