Tiwari locks Angoori in the bathroom when she tries to get romantic with him in the body of Vibhuti. 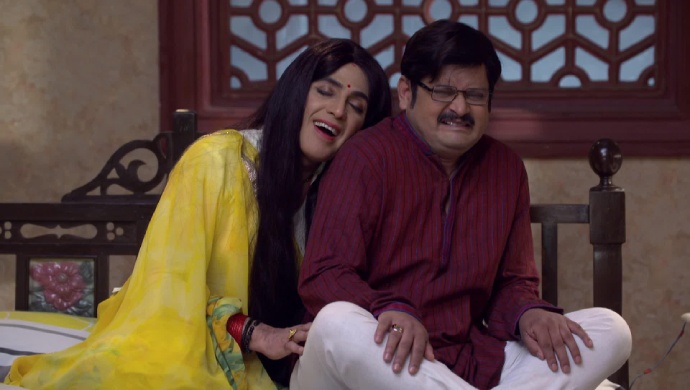 In tonight’s episode, Amma comes to visit Angoori at her house. She sees Angoori on the terrace and hugs her from behind. When she sees Vibhuti’s face with Angoori’s voice she is taken aback. Angoori comes out to the opposite balcony dressed as Vibhuti and greets Amma like Vibhuti. Amma is surprised and falls off the terrace, however she lands on Tiwari.

Amma brings Tiwari back home and slaps him to wake him up. She asks him to explain the whole situation with Angoori and Vibhuti. Tiwari blames Amma for sending Angoori to meet Hadbadanand baba and tells her the story. She runs out of the house saying she will ask Pandit Ramphal for a solution to this problem.

Later that night Angoori is trying to seduce Tiwari in bed. However, Tiwari is put off because her face and body is Vibhuti’s. He lures Angoori to the bathroom and locks her in. He goes to Vibhuti’s house looking for Angoori. Seeing him in the bedroom Angoori wakes up but as Vibhuti. When Tiwari tries to get close to her he beat him with a stick.

Happu Sing shows up with the school master asking for the 15,000 rupees Vibhuti owes the teacher. However Tiwari stops him saying that Vibhuti is actually Angoori. He says Happu Singh should go to Vibhuti’s house to ask for money and not harass Angoori. Stay tuned to find out more effects of this soul swap.