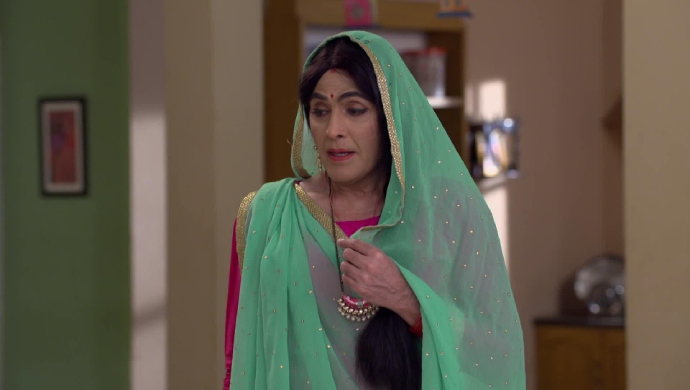 In tonight’s episode of Bhabi Ji Ghar Par Hain, Angoori and Vibhuti’s souls are put back in their bodies. However Hadbadanand baba made a mistake. When they wake up in the hospital, Angoori has Vibhuti’s soul. Vibhuti wakes up with Angoori’s soul. When they reach home Angoori tries to romance Tiwari, but he feels weird since she looks like Vibhuti. Meanwhile Angoori is dressed in Vibhuti’s clothes and speaks like him. When Ahppu SIngh comes to collect a 15,000 debt Vibhuti owes the teacher, he is shocked to see Angoori.

In the next episode, Angoori tries to romance Tiwari, but he avoids her in bed. Later Amma shows up and hugs Angoori from behind. However, when she turns Amma is shocked to see Vibhuti’s body. Angoori calls out to Amma from the other side in Vibhuti’s voice. Seeing this, Amma faints on the spot. Stay tuned to find out more effects of this soul swap.