Angoori's uncle is impressed by Tiwari and wants him to marry his daughter. 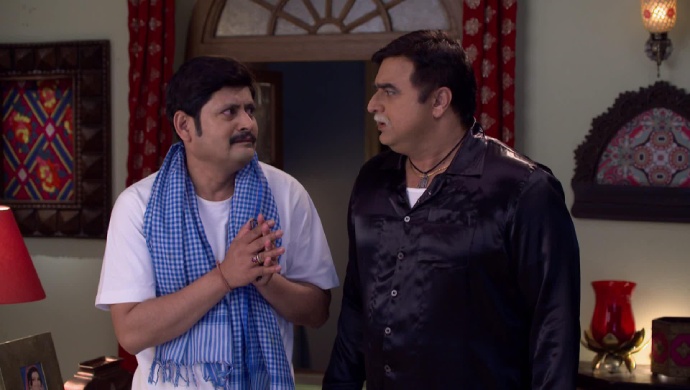 In the previous episode of Bhabi Ji Ghar Par Hain, Vibhuti shows up as Angoori’s husband to deal with her rich uncle. Tiwari, on the other hand, is forced to play the role of a servant in his own house. Tiku, Tilu and Malkhan are tricked into taking the truth injection from Saxena. Tilu overhears Tiwari acting as Vibhuti’s servant. Under the effects of the injection he promises to tell Angoori’s uncle the truth.

In tonight’s episode, Tiwari makes drinks for Vibhuti and Angoori’s uncle. Uncle tells Vibhuti to stop yelling at Tiwari for everything. He also tells Vibhuti that Tiwari seems nice. He asks Vibhuti about his income even though he doesn’t plan to take 14 lakhs rupees which Angoori’s father owes him.

Later that night, Vibhuti tells Angoori that he won’t sleep in the bedroom with her. He decides to go back to his own house and show up early in the morning. Tiwari, on the other hand is made to give the uncle a massage before sleeping.

While Vibhuti is leaving Angoori’s room. Tika, Tilu and Malkhan meet him and demand to know the truth for him. Tiwari goes to Angoori’s room to sleep. Her uncle comes up to her room and catches Tiwari in bed with Angoori. She tells him that Tiwari was giving her a foot massage.

The next morning Tiwari is getting insulted by Vibhuti at the breakfast table. Tiwari doesn’t say a word against him. Angoori’s uncle is impressed with Tiwari’s ability to take insult. He tells Angoori and Vibhuti, that he had a daughter who likes to insult and torture people. He tells Angoori that he wants Tiwari to marry his daughter.

Tiwari and Angoori are scared of Uncle’s idea. Vibhuti tells them to calm down. He says the uncle’s daughter won’t have such bad a choice to marry Tiwari. Meanwhile, Tika, Tilu and Malkhan are tied up and kept in Vibhuti’s house. They escape from there and go to the police to tell them the truth.