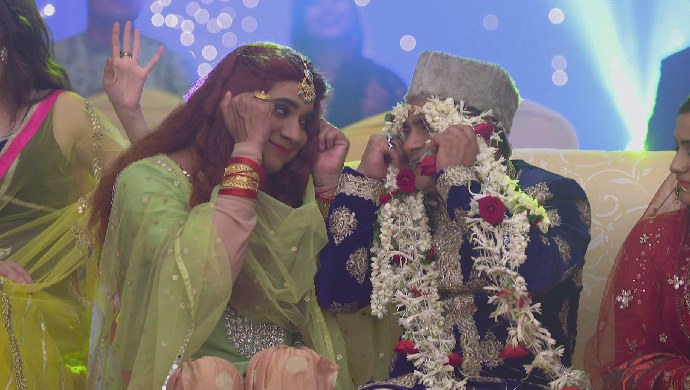 In the previous episode of Bhabi Ji Ghar Par Hain, Tiwari tells Zaliluddin that their family has been an admirer of art and culture and many singing sensations come to their place to perform their art. Zaliluddin insists them to perform a song. Next day, Vibhuti, Tilu and Tiwari welcome Zaliluddin and even this time they insist each other to enter the house first. Anita announces that the Sheer khurma will get over if they stand at the gate. Hearing this the Nawab runs into the house. After the meal, Tilu hints Vibhuti and Tiwari to not stretch the topic and talk about his wedding.

In tonight’s episode, Zaliluddin agrees to marry his daughter to Tillu and says that he will make all the arrangements at his palace. Saxena who is dressed as Tillu’s mother says that they want the wedding to be in their house.

On the day of the wedding, Vibhuti-Anita, Tiwari-Angoori perform on Bollywood songs. Saxena accompanies Marjina’s father Zaliluddin for a dance. The wedding takes place and everyone is happy for Tillu. Later that day, Tika and Malkhan are upset as they are missing their friend. On the other hand, Anita dreams of investing the money for her business. Similarly, Tiwari dreams of investing the money in his business and also plans to get more cash from Tillu.

What Made R. Balki Turn Arunachalam Muruganantham To Laxmikant Chauhan?

At night, Tika and Malkhan are having drinks together and cribbing about their luck. A few moments later, Tillu comes home and he looks like someone has beaten him very badly. The three of them go to Vibhuti’s house.

In the preview of the next episode, Tillu tells everyone that his wife Marjina is psycho and after going home she showed her true colours.