The cat is out of the bag and Angoori finally spills the beans on who her real husband is. But how will the uncle react? 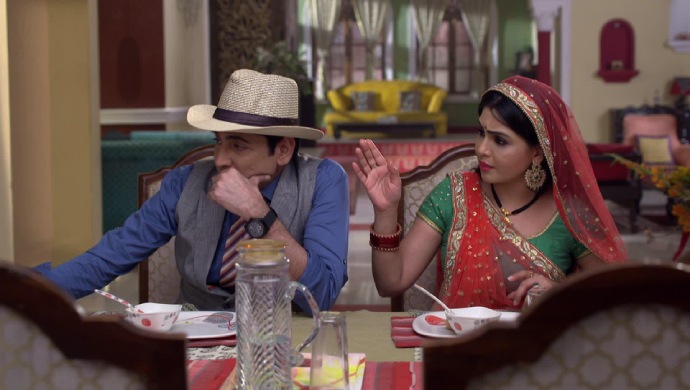 In tonight’s episode of Bhabi Ji Ghar Par Hain, we saw Nazuk making an appearance. Vibhuti starts insulting him and her dad joins in. Later, she is introduced to Tiwari and the father-daughter duo get busy ragging him as well. Later, Vibhuti and Angoori have a discussion in the kitchen where the latter asks her to keep playing the part and not lose her character. She says she is worried that Tiwari might just get married to the woman who came to see him for the rishta. Angoori’s father interrupts and she tells him about the fiasco that has been happening. She asks him to help but he says he can’t since he owes Nazuk’s father Rs. 14 lakh. He adds that the tricky part is that all the legal papers lie with him. Vibhuti asks him not to worry and focus on his own property, instead of these frivolous matters.

Angoori’s father asks her not to worry and assures her that he will figure something out. Meanwhile, Tiwari takes Nazuk out for pani puri and her antics at the stall, leave him flabbergasted.

The woman that came to see Tiwari, tells Angoori and Vibhuti that she likes Tiwari and wishes to get married to him. Angoori is devastated and blurts out that her real husband isn’t Vibhuti but Tiwari. She asks the woman to back off. Nazuk’s father is furious and decides that he will take Rs. 14 lakh at any cost from Angoori’s father. Just then, he enters with the money and says that there are Rs. 2 lakh extra in the case. He ridicules Nazuk’s father and asks him to take the money and leave. Angoori asks her father where he got such a huge amount from and he says that he owned a land named after her, which he sold.

Nazuk is put off by the whole thing and refuses to marry Tiwari, much to Angoori’s relief. She and her father finally leave Tiwari’s house. Later, Angoori tells Tiwari that her nath is broken and that she needs a new one. Tiwari dismisses her and asks him not to disturb her. Their conversation is overheard by Vibhuti, who thinks that Tiwari is just being plain cheap in refusing to buy a nath for his wife. The episode ends with Angooris storming off in anger.

What will the next episode hold for Angooori, Vibhuti and Tiwari? Will Vibhuti get the nath for Angoori? Stay tuned to find out!

Daayan Highlights: Saptrupa The Powerful Witch Is Freed By Janhvi