In tonight's episode, Tiwari uses Saxena's help to defeat Vibhuti in singing and remove him from the house. 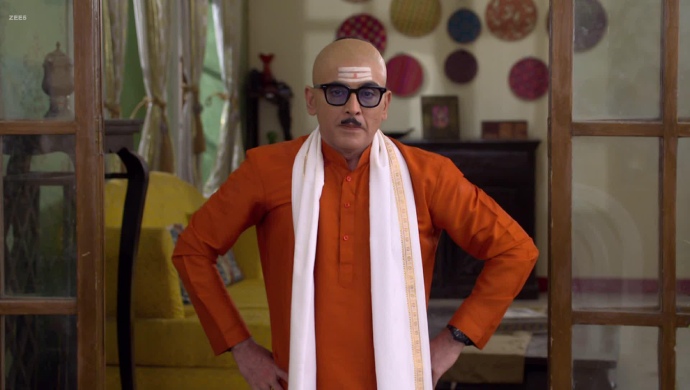 In the previous episode of Bhabi Ji Ghar Par Hain, Angoori wants to learn more in classical music. Vibhuti asks her to go with him to Mysore Park to learn more. Amma too wants to join them so Vibhuti gives up the idea. When he goes to teach Angoori she flirts withe South Indian teacher because she knows it is Vibhuti. Later on she calls Vibhuti boring in bed and says she wants to be with the music teacher.

In tonight’s episode, Tiwari goes to Saxena’s house to ask for his help. When he finds out that Saxena is a trained classical singer he asks Saxena to help him at home. Vibhuti is teaching Angoori music when Amma also sees the master teaching music and asks him to teach her too.

Tiwari shows up dressed like Kishore Kumar. He challenges Vibhuti to sing a duet. Tiwari lip syncs Saxena’s singing. Vibhuti tries to match Tiwari but in this homage to the movie Padosan, Tiwari ends up winning the challenge. Angoori tells Vibhuti to leave her house, she is going to learn music from her husband.

Vibhuti goes back to his house to teach Anita. She flirts with him there and asks him to run away with her. Vibhuti is upset and reveals his real identity. Anita says she knew it all along. When she hears how much money Vibhuti was making, she asks him to continue but Vibhuti refuses since Angoori fired him.

Happu Singh is beating up the school master. But he finds out that the real South Indian criminal was someone else. Tika, Tilu and Malkhan go back to the doctor to remove the scorpion poison from Saxena’s food. Saxena shows up and gives them a bag of money to say sorry. However the bag has a snake inside it.