After their latest trick fails due to hidden cams, the men of Modern Colony decide to protest against BST. Will they succeed in getting it abolished? 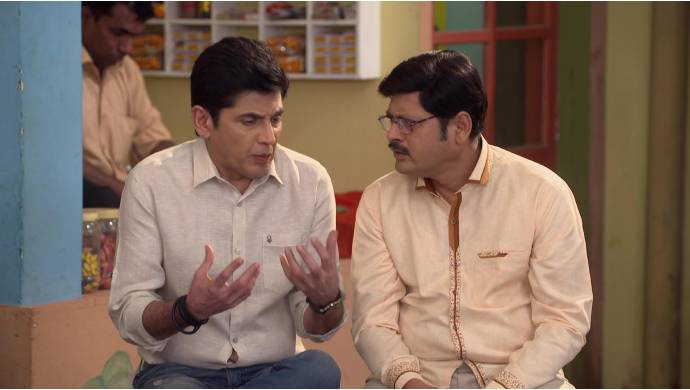 In today’s episode of the show Bhabi Ji Ghar Par Hain, we see how Vibhuti is talking with Angoori, expressing his love to her in the form of a story. He tells her that there is a pigeon that loves a bulbul. But the bulbul stays with a crow and the pigeon wants to fly away with the bulbul, as in secretly elope!

Meanwhile, Manmohan’s father visits Vibhuti’s mother with David. They try to leave. Manmohan’s father tries to push David out of the window, but the latter says that they could both push each other out so that neither of them stays back. The next day, Angoori, Manmohan, and his father are sitting in the living room when Manmohan tells his father that he makes a great peg of alcohol. Angoori agrees and tells him that even her mother has drunk a peg made by Manmohan’s father and finds it extremely soothing. Manmohan’s father laughs and tells them that even his mother used to love the pegs made by him and often used to express her love after getting drunk! Just then the government official walks in with their bills amounting to Rs. 5,00,000! They ask him how he found out they were talking to their bhabis. The official tells them that they had installed hidden cameras in their homes!

On the other hand, Vibhuti’s mother and David are bantering. Anita comes and tells them that she is happy that the BST officials are not roaming around anymore, as it was causing an inconvenience. But just then, an official walks in and presents a bill of 2,50,000 rupees! Vibhuti and Manmohan both go and ask Saxena for a solution for their problem. He asks them to protest and if it does not work, they should commit suicide. Later, Happu is seen talking to his sub-ordinates. Just then, Resham Pal walks in and says that he is going to suspend Happu!

Birthday Girl Achint Kaur: For The First Time In My Life, I Want To Grow And…

In the next episode, we will see how the men of Modern Colony, including Vibhuti and Manmohan, have decided to protest against the BST and demand that it be abolished!

What do you think will happen with the BST? Stay tuned to find out!

Stream all episodes of the show Bhabi Ji Ghar Par Hain only on ZEE5!