In tonight's episode, Vibhuti comes home and sees Yamraj standing near Angoori's house. He requests him to spare Angoori's life. 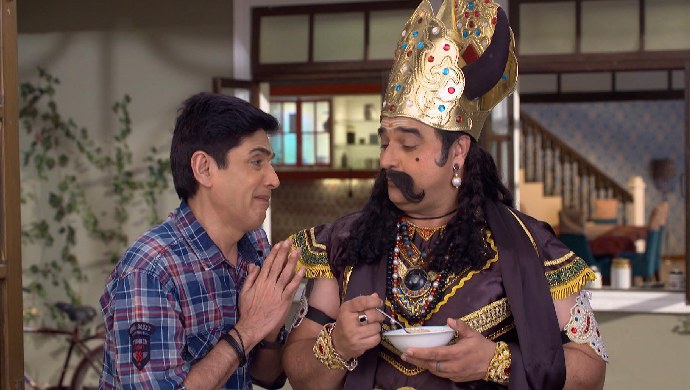 In the previous episode of Bhabi Ji Ghar Par Hain, Vibhuti and Prem go to have drinks and fall short of water. They go to a nearby ashram and ask for water from a baba. The baba gets angry and scolds Vibhuti for asking water for having drinks. He then tells Vibhuti that a person named Angoori is going to die in a road accident. Vibhuti gets scared and goes home to make sure that Angoori is safe.

In tonight’s episode, Anita’s friend Minal tells her that there is a prank competition going in Kanpur. She says that they have to find a person whom they can scare easily and make a video. Anita suggests Tiwari’s name and says that he can be an easy target.

Vibhuti takes money from Prem and goes to find Tillu, Tika and Malkhan. He sees TMT coming towards Angoori’s scooty and gets scared. He rushes to save Angoori and ends up getting injured. Meanwhile, Anita buys a fake knife and gets ready to prank Tiwari. When Tiwari comes home, Anita tells him that she is going to murder him. Minal records the video but says that they need to do better.

Dream Girl On ZEE5: Guys ( And Girls) Tell Us What They Look For In Their Dream…

Later that day, Vibhuti comes home and sees Yamraj standing near Angoori’s house. He requests him to spare Angoori’s life. But the latter leaves without replying to his question. Just then Angoori comes there and sees Vibhuti calling for Yamraj. She asks him he doesn’t want to live life.

In the preview of the next episode, Angoori convinces Tiwari to go for a long ride. Vibhuti smartly removes the petrol from Angooori’s scooter so that she won’t be able to ride the scooty. Tiwari watches him and runs to catch him. While Vibhuti is running away from Tiwari, he gets hit by a car again.