In the preview of the next episode, we see Bhoorey Lal and Helen flirting with each other. Will they fall in love all over again? Find out inside. 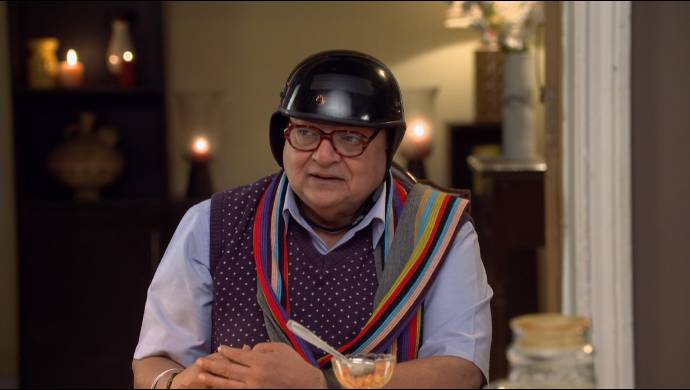 In the previous episode of Bhabi Ji Ghar Par Hain, we saw David asking Helen what she’s doing here at Vibhuti’s place. Helen reveals that she’s here to meet her son. David, on the other hand, informs that he wants give away his property worth Rs. 20 crores to Vibhuti’s impersonator and Anita. On hearing this, Vibhuti comes running and tears down the property papers. A while later, Manmohan and Vibhuti meet Bhoorey Lal and ask him if he knows them. The latter recognizes them at first but pretends to not recognize them before Angoori. Bhoorey Lal asks Angoori to put Vibhuti and Manmohan in a mental asylum. On the other hand, Vibhuti and Manmohan have nowhere to go and therefore think of committing suicide as no one seems to recognize them. Vibhuti and Manmohan buy poison from Teeka, Tillu and Malkhan. A while later, the entire Model Colony including the relatives of Manmohan and Vibhuti come out. Angoori then reveals the truth that took help from Model Colony and conspired against Vibhuti and Manmohan to teach them a lesson for insulting women. The latter realize their mistake and apologize before everyone.

In the upcoming episode, we see Helen giving money to Bhoorey Lal for cooking such delicious food for her. Helen says that she wants to thank the cook for doing this. Bhoorey Lal reveals that he has cooked everything himself. He reminds Helen that she had promised to give him something. They then flirt with each other. Anita and Manmohan notice the spark in the eyes of Helen and Bhoorey Lal.

Stay tuned to find out what happens next! Catch all the episodes of Bhabi Ji Ghar Par Hain exclusively on ZEE5.

#LeapDay: Make Use Of Extra 24 Hours To Binge-Watch Poison, Kaali Before Its Second Season