In tonight's episode, we see Bhoorey Lal hoping that Helen is invited to the party hosted by Manmohan and Angoori. Find out the details inside. 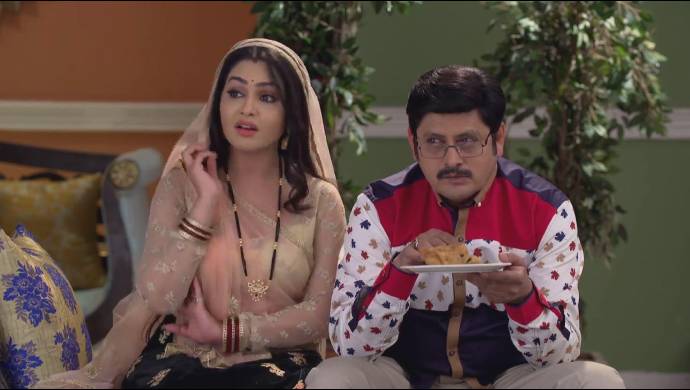 In tonight’s episode of Bhabi Ji Ghar Par Hain, we see Helen asking Anita why the latter screamed after seeing her. She then asks Anita if she looks that frightful. Anita says that she doesn’t find her horrifying but instead tells her that she looks beautiful. Just then, Vibhuti comes in and hugs his mother. Vibhuti tells Helen that Anita has the habit of yelling at people. Anita walks away from the scene after insulting them. After she does so, Helen asks Vibhuti if he also thinks that Anita is wearing revealing clothes. Vibhuti says that he does and asks Helen to instill their family values in Anita.

After a while, Bhoorey Lal comes in, much to Angoori’s delight. Bhoorey Lal then reveals that Angoori’s mother doesn’t love him anymore and fights with him often. At the tea stall, Prem reveals that he started his very own courier service and asks Teeka, Tillu, and Malkhan if they want to join his company. The trio agrees to work for him, at once. Prem then informs them that he has an opening for delivery boys and that he will pay them Rs. 100 per day. The trio is unhappy with the pay scale. A while later, Saxena Ji comes in and asks Prem about the services that he will offer. Prem reveals that he delivers anything and everything. To this, Saxena Ji remarks, saying that he likes it. Meanwhile, Angoori and Manmohan decide on the list of people to be called at their home for the party.

Bhoorey Lal hopes that they will somehow mention Helen’s name in the list but to no avail. He himself then suggests that they should call Helen for the party. Later, Helen is seen conversing with Anita and Vibhuti about Vibhuti’s father. Just then, Angoori enters their home to invite them for a party. She asks Anita to bring Helen along with them for the party. A while later, Bhoorey Lal is admiring how Helen managed to live happily despite the hiccups and how she had to clean utensils for a living. Helen reveals that she didn’t have to do that as she belonged to a rich family.