Tiwari has conflicting feelings about the Chinese massage he had. Will it come back to disturb his daily life? 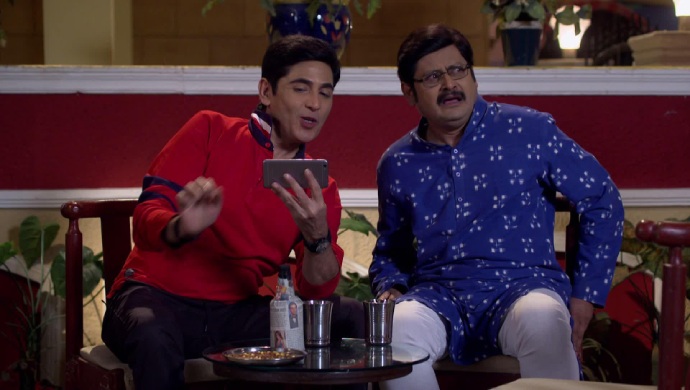 In last night’s episode of Bhabi Ji Ghar Par Hain, we saw Tiwari going to the Chinese Massage Centre where he gets a massage from Vibhuti dressed as a Chinese Masseuse named Suki. While he is enjoying the massage, Luki (who is actually Saxena) enters the massage room. Meanwhile, Tiku, Tilu and Malkhan are enjoying their massages from Luki and are willing to do anything to continue paying for the massages.

In tonight’s episode, Tiwari’s massage, which he was enjoying, ends abruptly when he senses discomfort with Suki tickling him. He hurries out from there but is unaware that Saxena has clicked pictures of him fooling around with Suki.

Tiku, Tilu and Malkhan are enjoying their group massage given by Luki and are planning a life with her unaware that Luki is in fact Saxena.

Angoori, hearing good things about the massage parlour from everyone, confides in Vibhuti about her back pain which is troubling her. She asks him for Suki’s number so that she too can book an appointment for a massage from her. Vibhuti tries to put her off because he doesn’t want to cheat Angoori into getting a massage from a man. He put her off saying that Suki only gives massages to men, not women.

Later that day, Tiwari complains to Vibhuti about the shady massage parlour he sent him to, when Saxena enters as Luki saying he has received a message from Suki. He shows Tiwari the pictures he took in the massage room and says Suki likes Tiwari and wants to come over to his house for dinner or else she will put the pictures on the internet. Tiwari is left with no choice but to agree to her demands.

Will Tiwari’s massage cost him heavily or will he uncover the plot behind his blackmail? Stay tuned for more updates.