In tonight’s episode of Bhabi Ji Ghar Par Hai, Babaji has a weird solution for Manmohan’s problems. Find out what happens next inside. 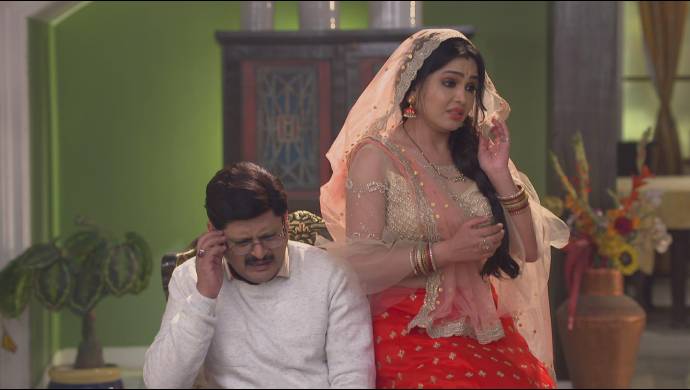 In this episode of Bhabi Ji Ghar Par Hai, we see Vibhuti dressed up as a Babaji, which sparks trouble in Manmohan’s life. Vibhuti asks Manmohan to feast on a purple-colored dog, until next week. He says that Manmohan must start practicing this activity from the next day at 2 pm. The latter, however, is hesitant, thinking as to where he would find a purple-colored dog.

Meanwhile, Vibhuti seeks help from Chhedi to beat Manmohan up at the Dhobi Ghat. Chhedi asks Angoori about when she would be able to bring Manmohan in. Angoori says that she will be able to do so, at around 2 pm. Later, Anita and Vibhuti are seen fast asleep in their bedroom. Just as Vibhuti tries to sleep, Anita barks mischievously to disturb him.

On the other hand, Tillu, Teeka and Malkhan who are currently homeless, seem to have found a place to crash in. They all seek shelter at Saxena Ji’s house. Angoori is conversing on the phone with Chhedi. The latter wants Angoori to come in by 12 pm, so that the work can get done before his wife comes back home. Angoori says she can’t do so, as Babaji wants Manmohan to present at 2 pm. She then calls up Vibhuti and asks him, if he can change the time to 11 am. Just then, Manmohan enters the room and Angoori passes on the phone to him.

Teeka, Tillu and Malkhan who are at Saxena Ji’s house, are asked to behave like his pet dogs. As they approach the tea stall, Saxena Ji forces them to lick Happu. Happu who is caught unaware, thrashes all three of them.

In the upcoming episode, we see Angoori mercilessly beating up Vibhuti, at a Dhobi Ghat. What do you think happens next? To find out watch the next episode. Catch all the episodes of Bhabi Jo Ghar Par Hain, streaming for free on ZEE5 here.