After seeing Tiwari refuse to buy an expensive sari for Angoori, Vibhuti comes up with a plan to get it for her. 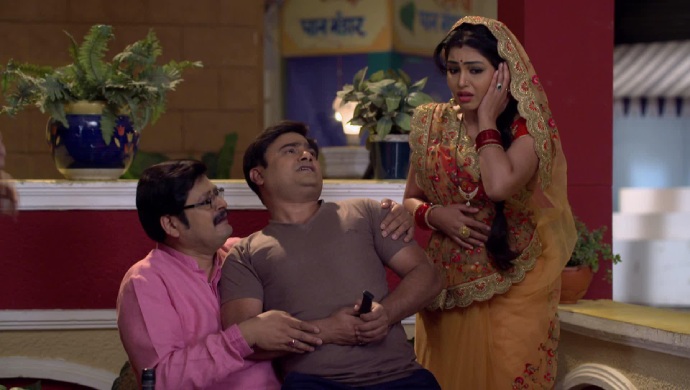 In the previous episode of Bhabi Ji Ghar Par Hain,  Tiwari gets caught cheating on Angoori with Suki. He tries to explain that he was trapped by Suki but Angoori threatens to kick him out of the house. To clear out his name he goes to the Chinese massage parlor where Suki works. Happu Singh comes by and uncovers Vibhuti and Saxena’s entire fraud operation.

In tonight’s episode, Angoori books a sari at a clothing store and says she will buy it later. She gets a call asking if she wants the Sari or not. She tells Tiwari about the original Banarasi Sari with gold and silver designs that she wants. On hearing the price Tiwari tells her he won’t buy the sari for her. Vibhuti who hears the entire conversation decides to buy the sari for her.

Tiku, Tilu and Malkhan are struggling at the end of the month to even pay their rent. They see Saxena having a lot of money and ask him for help. Saxena denies help because he only helps mental people and not stupid people.

Even the doctor denies to help them. Vibhuti comes up with a plan to get money for Tiku, Tilu and Malkhan. The plan includes the doctor.

One night Tiwari is drinking with Vibhuti, two criminals break into his house holding a knife to Tiwari. Tilu steps in and take the knife into his stomach instead of Tiwari. Seeing that Tilu is still alive they decide to take Tiwari to the hospital.

The Doctor says that to save Tilu’s life, the operation will require an operation worth 1.5 lakh, with 1 lakh advance. Tiwari gets pushed into paying 1 lakh for the operation using emotional blackmail.

The next morning when Tiwari shows up with the money, he sees Tiku, Tilu, Malkhan deciding with the doctor and Vibhuti how to split the money between themselves. Hearing this Tiwari loses his cool and takes his money back while Vibhuti’s plan fails.