In tonight's episode, Tillu, Teeka, and Malkhan bite Saxena Ji, to thank him for letting them stay as his pet dogs. Details inside. 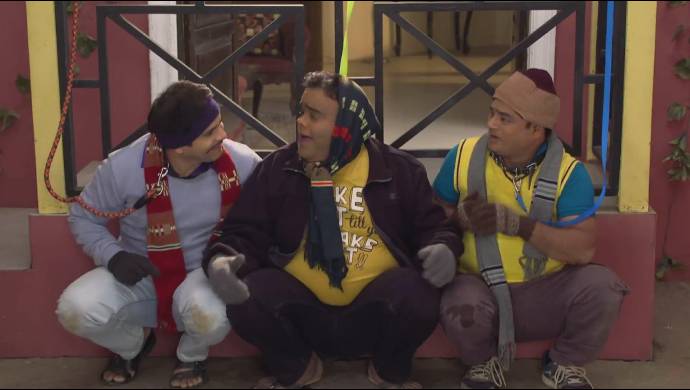 In this episode of Bhabi Ji Ghar Par Hai, we see Anita still pretending to be a dog in front of Vibhuti. Anita is worried and is asking Vibhuti, as to where he will find bones and milk for her now. Vibhuti walks away feeling troubled.

We then see Vibhuti at the Tiwari residence, talking with Angoori and Manmohan. Manmohan cannot find a purple-colored dog and is therefore worried. Angoori convinces him to find it as soon as possible, to avoid any further troubles. She asks him to go search for it at the railway station. Manmohan goes away with the tiffin box, meant for feeding the dogs. In the meantime, Angoori tells Vibhuti to come to the Dhobi Ghat. Saxena Ji frees his pet dogs, Teeka, Tillu, and Malkhan. The trio is finally let off from the leash. They come back, again to thank Saxena Ji and bite him hard as he exclaims “I like it!”.

Meanwhile, at the Dhobi Ghat, Angoori is thanking Vibhuti for cooperating with her. Vibhuti tells her about Anita, and says that she has turned into a dog and eats bones. Then Angoori gets a call, and it turns out to be Ammaji’s. Ammaji tells her to stop following the instructions which she had given. Turns out, Pandit Ramphal had mixed Manmohan’s kundali with someone else’s. Later, Teeka, Tillu, and Malkhan, who are packing their bags and are about to leave, are stopped by Saxena Ji. He tells the trio, that he has arranged a special entertainment session for them. Saxena Ji dresses up as a dancer and entertains Teeka, Tillu, and Malkhan, while they sip on alcohol.

In the upcoming episode, we see Anita packing her bags because she finds out that her mother-in-law is coming. Will Anita go away? Catch all the episodes of Bhabi Ji Ghar Par Hain, streaming for free on Zee5.

Riya Sen: Education Is The Only Way To Change The Scenario Women Are Facing In India Today