Manmohan's mother asks him to remarry, while Vibhuti's uncle gives him the responsibility of marrying Reshma. Read on to find who Reshma is! 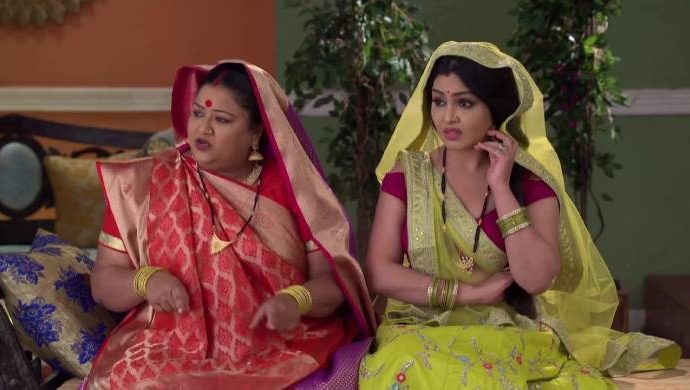 In today’s episode of the show Bhabi Ji Ghar Par Hain, we will see how Anita reprimands Vibhuti for stealing money from the funds they collect for the home’s maintenance. Vibhuti denies the allegation and says that he did not steal, but the electricity bill was double this month. Anita demands the receipt and Vibhuti says he lost it. Anita starts blaming him for theft and lying. Meanwhile, Angoori hears a puppy cry and wail and she says that this a bad sign according to a superstition. Manmohan agrees with his wife.

Later, we can see Tillu, Teeka, and Malkhan asking Saxena why he has started to behave like a dog. Saxena says that he wants to feel the pain of dogs and shooes them away by scaring them with his ferocious face. Meanwhile, Vibhuti’s uncle calls him and says he will bring over Reshma, a girl he wants Vibhuti to marry, and she will give him 50 crore rupees. Anita and Vibhuti are confused about who Reshma is!

Next day, Anita is still angry and she continues with her cribbing. She also tells Vibhuti that his uncle David is also just like him, a jobless money launderer. Just then, Vibhuti’s uncle walks in and introduces himself. He asks Vibhuti to get married to Reshma as she is the apple of his eye and he trusts Vibhuti. But Anita declines his offer saying she is not ready for it. On the other hand, Manmohan’s Amma visits them and talks to Angoori about her marital relations with Manmohan. Angoori says that they are happy, but Manmohan’s mother tells them both that a pandit Ramphal has suggested remarriage for Manmohan. Angoori is distressed at this thought!

Jiten Lalwani On Kahat Hanuman Jai Shri Ram: I Am In Awe Of Ekagrah Dwivedi Aka…

In the next episode, we will see that the Reshma Vibhuti’s uncle is pointing towards is a buffalo! Anita happily accepts Reshma and says that they would get her married off to another buffalo. But Vibhuti’s uncle tells them that they have to get Reshma married to a human being! Will Reshma be Manmohan’s next wife? Stay tuned to find out!

Stream all episodes of the show Bhabi Ji Ghar Par Hain, only on ZEE5!

SRK Takes To Instagram For A COVID-19 Appeal: "Coronavirus Is Creeping Into Our Souls."