In tonight's episode, we see Vibhuti trying to prove his identity to Anita. Find out the details inside. 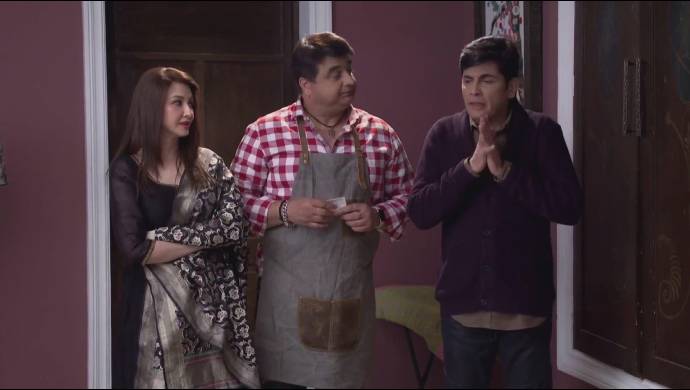 In tonight’s episode of Bhabi Ji Ghar Par Hain, we see Vibhuti telling Manmohan that everyone in the city knows him. Manmohan agrees saying that every dog in the city barks at him. Meanwhile, Vibhuti’s lookalike is pretending to flirt with Angoori. The real Vibhuti notices this and runs to them. Angoori, on the other hand, doesn’t seem to recognise both Vibhuti and Manmohan. She denies the fact that the real Manmohan is her husband too. Vibhuti’s lookalike announces that Vibhuti is a fraud. Both the real and the dummy Vibhuti then fight. Just then, Anita enters and doesn’t recognize Vibhuti and Manmohan. She then goes away with Vibhuti’s lookalike while Angoori goes away with Manmohan’s lookalike, much to the horror of Manmohan and Vibhuti.

Later, Anita and Vibhuti’s lookalike then fight over a cup of coffee. Just then, the doorbell rings and the real Vibhuti enters. The latter puts his feet on the coffee table and therefore Anita orders him to put his feet down. Vibhuti tries hard to convince Anita that he’s her husband but Anita isn’t convinced. After a while, Vibhuti’s lookalike pushes Vibhuti out of the house. They then hear a knock on the door. As Vibhuti’s lookalike opens the door, Vibhuti makes his way forcibly into the house. Vibhuti’s dummy asks Anita to call the police. On the other hand, Angoori also throws Manmohan out of the house by beating him with a stick. Angoori then asks the dummy Manmohan if she should get breakfast for him. After a while, Vibhuti tries to prove his identity by showing Anita the Aadhar card. He is surprised to find the dummy Vibhuti’s photo on it. Anita asks the dummy Vibhuti to throw Vibhuti out of their house. At the tea stall, Vibhuti and Manmohan wonder what’s happening in their lives. They then devise a plan to get their identity back. Manmohan tells Vibhuti that they need to appoint a person who would take their side and recognise them before their respective wives. Manmohan wonders who the person would be.

Will Vibhuti and Manmohan be able to prove their identities? To find out, keep watching Bhabi Ji Ghar Par Hain exclusively on ZEE5.