Tiwari ends up doing Angoori's homework to make sure she gets to school on time. 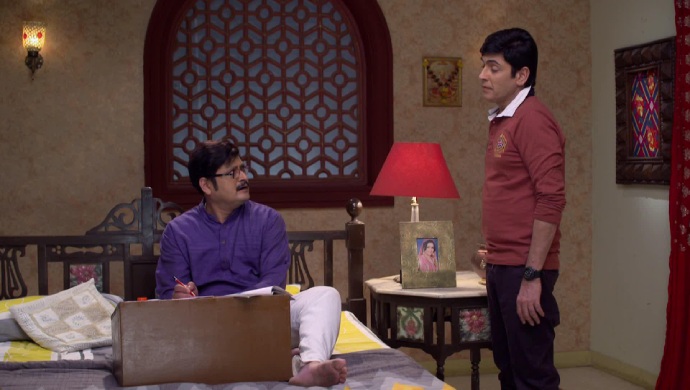 In the previous episode of Bhabi Ji Ghar Par Hain, Tiwari agrees to send Angoori to school. Vibhuti dresses up as a school boy and takes Angoori to school on his cycle. Tiwari gets a new client home who offer a lot of money. However, Tiwari ends up lying that Angoori is a teacher in school. Meanwhile, Saxena asks Tika and Malkhan to rob the police commissioner if they want the large treasure in an old house.

In tonight’s episode, Tiwari’s client comes home and sees Angoori in a school uniform. He finds out that Tiwari lied that Angoori is a teacher. He says he doesn’t want to do business with someone who is ashamed of his wife studying. Tiwari ends up losing his big client.

Later that night, he tries to romance Angoori in bed but, Angoori is doing her homework. Vibhuti steps in through the bedroom window and asks Tiwari to do Angoori’s homework. That way she will be able to wake up on time in the morning.

The police commissioner is riding his bike late at night when he stops to take a call. While he is on the call, Tika and Mlkhan show up from behind him and rob his belongings. Tika and Malkhan are doing this to get the treasure. They go back to Saxena with the loot and ask for the treasure.