Vibhuti and Angoori get caught for bunking and Vibhuti ends up getting expelled. 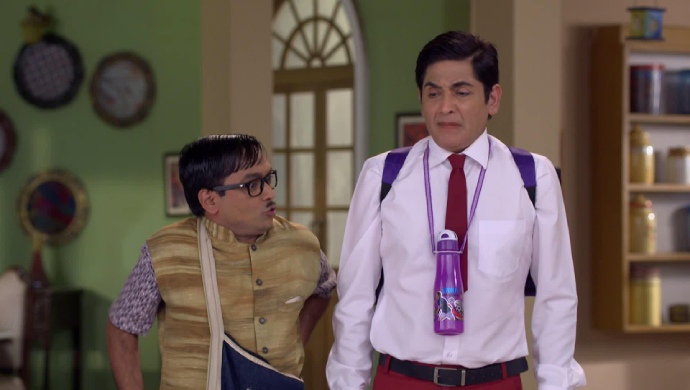 In the previous episode of Bhabi Ji Ghar Par Hain, Angoori comes back from school when Tiwari has a client at home. He loses the contract for lying about Angoori going to school to study. Later to save Angoori’s time, Tiwari begins to do Angoori’s homework too. The next morning when Angoori is going to school Vibhuti asks her to go with him and watch an educational movie.

In tonight’s episode, Angoori comes back from school and Tiwari asks her what she did in school. Angoori fumblkes and asks him if he wants tea. Just then Angoori’s school master shows up to her house. He tells Tiwari that Angoori has stopped coming to school completely.

Just then Vibhuti also enters Angoori’s house. The master calls him too and asks him why he has been bunking. Angoori gives in and tells Tiwari that Vibhuti takes her away from school everyday. She says Vibhuti considers bunking to be an important part of school. Hearing this the school master expels Vibhuti from school.

Later that night, Vibhuti is seen drinking. He tells Tiwari that if doesn’t get to go to school Angoori also should not. Tiwari also tells Vibhuti that he lost a big client because of Angoori going to school. Vibhuti mentions that Anita has stopped talking to him after he got expelled.

Happu Singh is passing by Saxena’s window when he hears his whole plan. He enters the house and says he will punish Tika and Malkhan by beating them up. To punish Saxena, he will only get to watch Happu Singh beat Tika and Malkhan.

The next morning, Angoori is getting ready for school when she sees the expelled Vibhuti looking sad. Vibhuti tells Angoori about the losses Tiwari is facing with clients, because Angoori is going to school. Angoori feels bad and decides to stop going to school. Stay tuned to know what happens next week to your favourite characters on Bhabi Ji Ghar Par Hain.