In tonight's episode, Anita blames Tiwari for everything and tells him that he has to get Vibhuti and her ring back any how. 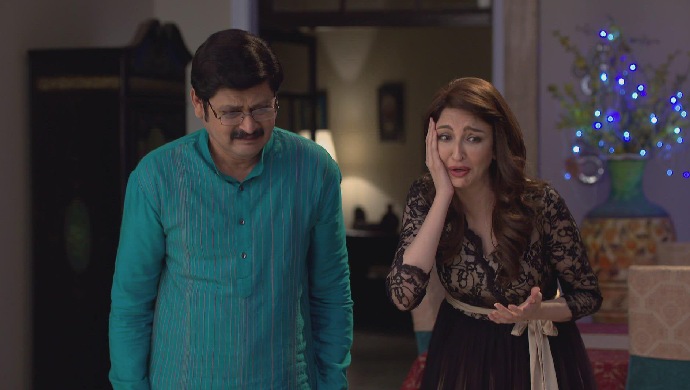 In the previous episode of Bhabi Ji Ghar Par Hain, Vibhuti tells Anita that he swallowed her ring the moment he fell on the ground. Anita pressurises Vibhuti to get the ring out of him by whichever way possible. The latter asks him to show some mercy and not forget he is her husband. Angoori suggests a Kadha for Vibhuti so that his stomach will get cleared instantly.

In tonight’s episode, Anita gets excited when Angoori and Tiwari bring the Kadha for Vibhuti so that he will be able to get the ring out of his body. Vibhuti refuses to drink the Kadha but Anita, Tiwari and Angoori force him to have it. A few moments later, Vibhuti comes out from washroom and tells them that the Kadha did not work.

Meanwhile, Tillu, Malkhan and Tika get a call from Prem asking them to Kidnap Vibhuti. The trio is left with no other option than kidnapping Vibhuti. Later, Angoori calls Amma to inform that the Kadha did not work. The latter tells her that she gave the wrong Kadha to Vibhuti. She then promises to send her the correct recipe of the Kadha but she asks her to wait for a few days.

Planning To Get Inked? Check Out These Cool Tattoo Styles Inspired By Ssudeep…

Later at night, while Vibhuti and Tiwari are having drinks, Tillu, Tika and Malkhan come with their faces covered with masks and kidnap Vibhuti. Tiwari panics and goes to inform Anita about it. Anita blames Tiwari for everything and tells him that he has to get Vibhuti and her ring back anyhow.

In the preview of the next episode, Tika, Tillu and Malkhan to operate Vibhuti and take the ring out of his body.  What do you think will happen in the next episode? Let us know your thoughts in the comments with the hashtag #BhabiJiGharParHain.