In tonight's episode, we see Angoori and Anita finally revealing the truth to Manmohan and Vibhuti. Find out the details inside. 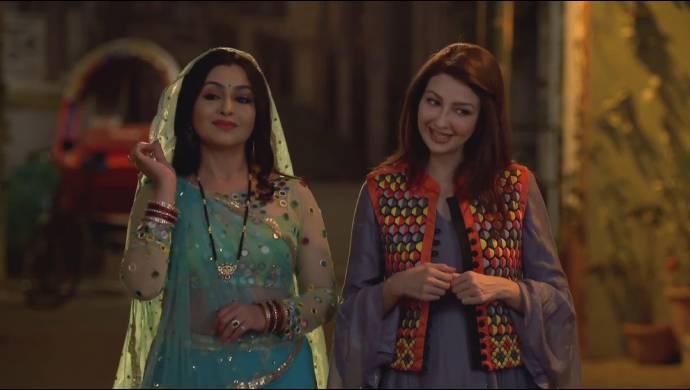 In tonight’s episode of Bhabi Ji Ghar Par Hain, we see Helen and David at Vibhuti’s house. David asks Helen what is she doing here. Helen replies that she is here to meet her son. David, on the other hand, says that he’s here to greet his nephew Vibhuti. Helen asks David if he has ever given anything to Vibhuti from his huge estate. After a while, Anita tells David and Helen that Vibhuti and Manmohan are identifying themselves as Anita’s husband and Angoori’s husband respectively. David says that Vibhuti’s impersonator is his real nephew. A while later, Manmohan and Vibhuti meet Bhoorey Lal and asks him if he knows them. The latter recognizes them instantly, much to Manmohan and Vibhuti’s delight. Manmohan calls out to Angoori and asks her to come out. Angoori and Manmohan’s impersonator comes out. The latter then reveals that Manmohan is troubling them for a very long time. Bhoorey Lal asks them to put those two in a mental asylum. Angoori tries to pacify Bhoorey Lal and asks him to come inside for a cup of tea. After they go away, Vibhuti tells Manmohan that Bhoorey Lal has also joined hands with the impersonators and they have nowhere to go.

Later, Vibhuti and Manmohan plan to commit suicide as no one seems to recognize them. Manmohan asks Vibhuti to fetch a bottle of poison from the market. To this, Vibhuti replies that he doesn’t have the money to even buy poison. Manmohan then says that he will arrange for it. A while later, Vibhuti and Manmohan seem to be dying outside their own homes. Just then, everyone from the Model Colony comes out and they reveal the truth. Angoori then confesses that they were pretending to not recognize Vibhuti and Manmohan to teach them a lesson for insulting women. Anita reveals that they took help from everyone in the Model Colony to do that. Angoori says that they even included their relatives in their plan. Later, Manmohan and Vibhuti apologize for their mistakes.