In tonight's episode, Teeka, Tillu, and Malkhan give up using their mobile phones. Find out the details inside. 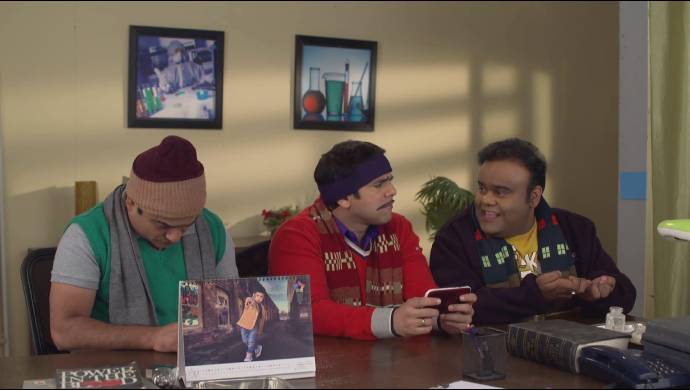 In this episode of Bhabi Ji Ghar Par Hai, we see Mamaji entering Manmohan’s house while Manmohan-Angoori and Vibhuti-Anita are sitting there. Mamaji lectures Manmohan and Angoori on their behavior. Meanwhile, Saxena Ji tells Teeka, Tillu, and Malkhan that they have become over-occupied with the digital world. He asks the trio to get rid of this habit or else they would be in trouble. Teeka then tells him to listen to Saxena Ji’s advice and keep the mobile phone away. At Manmohan’s house, Angoori, Vibhuti, and Manmohan agree to give Rs. 25,000 to Mamaji. To this, Mamaji replies saying that he doesn’t want their money. He then says that they all have gone crazy and are overusing their mobile phones.

After a while, Anita and Manmohan are dressed up like Michael Jackson and are preparing to record their TikTok video. Just then, Mamaji enters and says that he will help them record it. Mamaji then asks Manmohan to remove his clothes. Manmohan pleads with him to let him shoot for the video fully dressed, as he is embarrassed to remove clothes in front of Anita.

Meanwhile, Anita and Vibhuti tell Happu that they will make him famous and convince him to make TikTok videos with them. At the tea stall, the doctor tells Malkhan that his eyes are affected because of overusing mobile phones. Masterji lectures Teeka on sanskaars and asks him to do some work instead of begging. Later, Vibhuti enters Angoori’s home and tells her that Anita has refused. Vibhuti tells her to ask Manmohan for the money. Angoori then says that she will speak with Manmohan but says that she knows he won’t give them any money. Just then, Manmohan enters and she asks him for the same. As expected, Manmohan refuses to give them any money. Meanwhile, at the tea stall, Saxena Ji asks Teeka, Tillu, and Malkhan to give up using mobile phones. Teeka says he agrees and adds that Saxena Ji makes sense. Then, Teeka, Tillu, and Malkhan together pledge to give up their mobile phones.

In the upcoming episode, Angoori-Manmohan and Anita-Vibhuti are shocked to hear that the TikTok company has closed down. What madness is about to unfold next in their lives? To find out, watch Bhabi Ji Ghar Par Hain, streaming for free on ZEE5.