In tonight's episode, we see Bhoorey Lal and Helen exchanging gifts with each other. Find out what the gifts are inside. 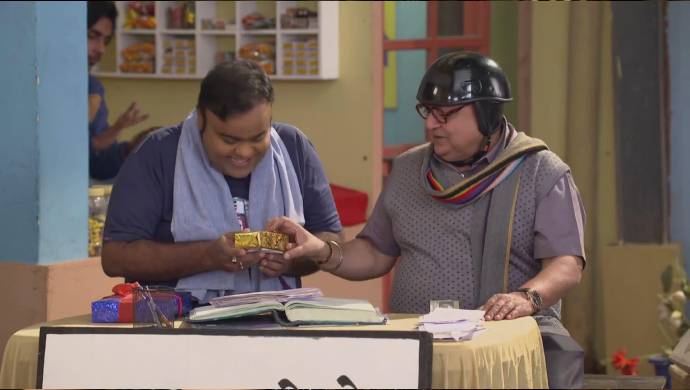 In tonight’s episode of Bhabi Ji Ghar Par Hain?, we see Helen preparing Gajar Halwa specially for Bhoorey Lal. When Manmohan tries to eat the Gajar Halwa, she stops him and asks him to give it to his father-in-law, Bhoorey Lal. On the other hand, Anita asks Helen if the latter hasn’t made Gajar Halwa for her. Helen tells her that too much sweet is not good for someone like Anita who’s conscious about her health.

Meanwhile, Bhoorey Lal openly praises Helen before Manmohan and Angoori for making the Gajar Halwa. He then says that he wants to enjoy the Gajar Halwa made by Helen in private and leaves. At the tea stall, Masterji seeks help from Teeka as he wants to deliver his parcel. Malkhan asks him what is inside the parcel. Masterji informs them that the box contains laddoos for his mother. Teeka then agrees to deliver the parcel for free and keeps the laddoos for himself.

A while later, Bhoorey Lal comes to Teeka and asks him to deliver a gift to Helen. He then informs Teeka that he has also attached a note for Helen along with the gift. Meanwhile, Anita informs Vibhuti that she had received a call from Vibhuti’s father. Vibhuti reveals that he had called his father himself to make him understand. To this, Anita says that no one in Vibhuti’s family can learn to behave properly. Just then, Teeka comes in to deliver a parcel at Anita and Vibhuti’s house. Helen rushes to collect it.

Later, Angoori shouts at Manmohan for misbehaving with Bhoorey Lal. The latter asks her to let it go as he was just making fun of him. On the other hand, Anita wants Vibhuti to tell Helen to behave herself. Vibhuti asks Anita to not bother him as he’s tensed already. After a while, Manmohan asks Angoori why Bhoorey Lal has stayed at her house for so long. Angoori asks if Vibhuti has a problem with it.

In the upcoming episode, we will see Vibhuti reading a love letter and is surprised to find that it is written by Bhoorey Lal. After a while, Tillu delivers a parcel at Manmohan’s house addressed to Bhoorey Lal. He reveals that there’s a letter attached with the parcel. Vibhuti snatches it from Tillu and goes in a state of shock after reading it.

What will happen in the next episode? Stay tuned! Watch Bhabi Ji Ghar Par Hain? exclusively on ZEE5.