In tonight's episode, Vibhuti gets scared when he learns that Anita is possessed. 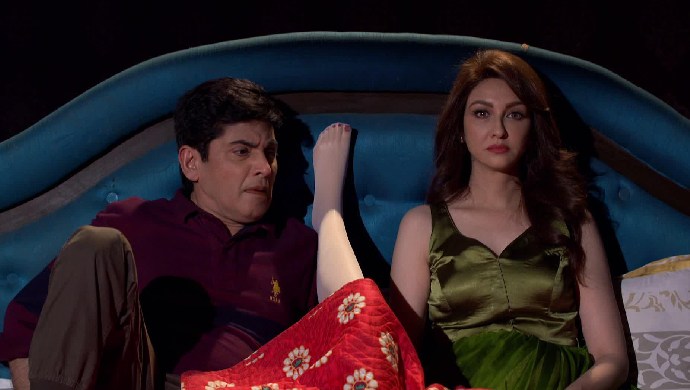 In the previous episode of Bhabi Ji Ghar Par Hain, Manmohan gets frightened when Anita asks him to drop her near the graveyard. Next day, Vibhuti feels suspicious about Anita’s behaviour. When Manmohan asks Anita about the previous night, she tells him that she doesn’t remember anything. Manmohan goes to “Drawer Wale Baba” to get help. The baba tells him to make sure that Anita and Vibhuti stay away from each other for the next two days.

In tonight’s episode, Vibhuti’s friend Prem takes him to Drawerwale Baba. The Baba tells Vibhuti that if he wants Anita to start respecting him then he needs to make love to her in the next two days. Amma comes home and gives a book of witchcraft to Angoori.

At night, Vibhuti plans to shut the door of his house and go to bed. Just then, Manmohan comes home to have drinks with Vibhuti but the latter refuses to have drinks and asks Manmohan to go home. Later, Vibhuti comes to his bedroom and gets close to Anita. She twists her leg and asks Vibhuti to massage her legs. Seeing this, Vibhuti gets frightened and leaves the house through the balcony.

He comes at Manmohan’s house and tells Angoori and Manmohan about the incident. Manmohan suggests they should go to the graveyard where he had dropped Anita earlier. While they are on their way to the graveyard, they see Anita standing on the road and offer her lift.

In the next episode, Angoori uses the book of witchcraft to call the spirit who has possessed Anita. Vibhuti requests her that he want to romance with his wife because a baba has asked him to do so.

Birthday Girl Achint Kaur: For The First Time In My Life, I Want To Grow And Make It Big