Tiwari and Happu both get shocked by seeing this behaviour of Angoori Bhabi as she spills tea over Happu Singh. 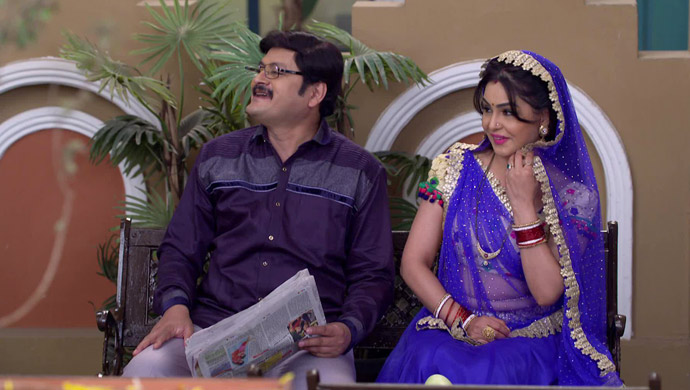 As we saw in the last episode, Angoori Bhabi starts dancing whenever she hears the sound of a tambourine. Knowing this fact, Vibhuti plans to play the tambourine everytime she is doing something around Manmohan Tiwari, because Vibhuti knows that it irritates Tiwariji. It was great fun seeing Angoori Bhabi dancing to Vibhuti’s tunes.

Continuing the same, in the current preview of Bhabi Ji Ghar Par Hain, we see three thieves, probably Teeka, Malkhan and Tilu trying to loot Manmohan Tiwari’s house, while Angoori and Manmohan Tiwari are asleep. Vibhuti, who is seen standing in his bedroom starts playing Dafli as he knows the fact that Angoori bhabi starts dancing after hearing to the music of Dafli. Angoori Bhabi then starts dancing, seeing this all the three thieves hide under their bed. Angoori in her own trance keeps dancing and while doing so she unknowingly kicks Manmohan Tiwari and wakes him up.

Meanwhile, watch all the episodes of Bhabiji Ghar Par Hai on ZEE5.