In tonight's episode, we see Bhoorey Lal and Helen being brought to the police station by Happu. Find out the details inside. 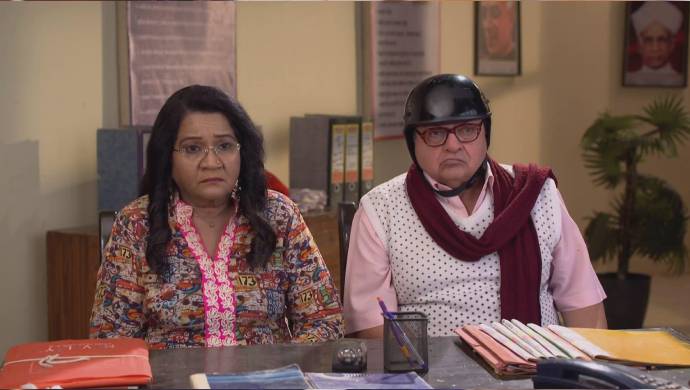 In tonight’s episode of Bhabi Ji Ghar Par Hain?, we see Manmohan and Vibhuti fighting with each other. Manmohan says that Helen is trying to get close with Bhoorey Lal. On the other hand, Vibhuti tells him that it is Bhoorey Lal who is sending gifts to Helen and has fallen in love with her. After a while, Manmohan asks Bhoorey Lal to stop flirting with Helen as he feels that the society will outcast them if he continues to do it. Bhoorey Lal agrees to it reluctantly.

A while later, Anita and Vibhuti receiving a parcel from the delivery service. The parcel is a bottle of alcohol with a note along with it. Vibhuti begins to read the love letter addressed to Helen and is surprised to find that it is written by Bhoorey Lal. At the tea stall, Tillu announces that Bhoorey Lal has gone crazy in Helen’s love. A while later, Saxena Ji wants Teeka, Tillu, and Malkhan to deliver burning coals to the former’s grandmother. The trio shoo away Saxena Ji as they find the idea ridiculous.

Later, Angoori is worried because she cannot find Bhoorey Lal in the house. Just then, Vibhuti enters Manmohan’s house and reveals that Bhoorey Lal is gone away to watch a movie with Helen. After a while, Tillu delivers a parcel at Manmohan’s house with a letter attached to it. Vibhuti takes the letter from Tillu and goes in a state of shock after reading it.

In the upcoming episode, we will see David asking Manmohan to control Bhoorey Lal or face the consequences. Manmohan tells him to keep a check on Helen too. After a while, David tries to strangle Bhoorey Lal to death.

Daroga Happu Singh’s Hairstyle Was Followed By His Biggest Fan, Guess Who?

What will happen in the next episode? Stay tuned to find out! Watch Bhabi Ji Ghar Par Hain? exclusively on ZEE5.