In tonight's episode, Vibhuti asks for Roxy's permission to get romantic with Anita. Manmohan comes there and threatens Vibhuti with a knife. 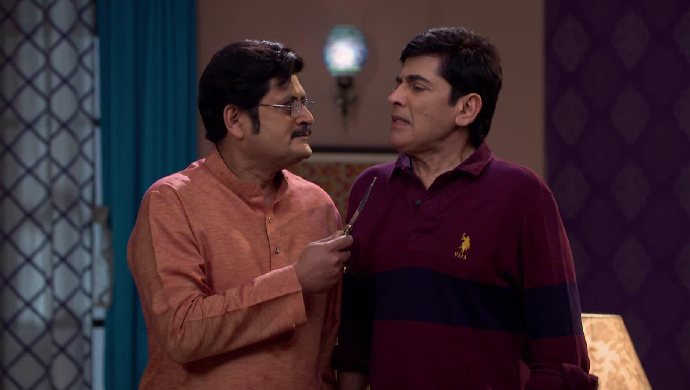 In the previous episode of Bhabi Ji Ghar Par Hain, Vibhuti plans to shut the door of his house and go to bed. Just then, Manmohan comes home to have drinks but the latter refuses and asks Manmohan to go home. Later, Vibhuti comes to his bedroom and gets close to Anita. She twists her leg and asks Vibhuti to massage them. Seeing this, Vibhuti gets frightened.

In tonight’s episode, Vibhuti and Manmohan meet Anita on their way to the graveyard. They get scared when Happu Singh tells them that he cannot see Anita with them. Later, Angoori tells Manmohan and Vibhuti that she has an idea to help them out.

Angoori uses the book of witchcraft given by Amma, to call possessed Anita. She tells her name as Roxy and says that she has possessed Anita to take revenge from her murderer. Vibhuti goes to his bedroom and asks Roxy that he wants to romance with his wife. Anita starts laughing at him saying she was kidding. A few moments later, Manmohan comes to Anita and Vibhuti’s bedroom and threatens Vibhuti with a knife.

Next day, Manmohan’s friend DK returns from his trip and asks Manmohan if he went on a drive with Angoori or not. The latter replies that he couldn’t make it due to some unnatural incidents. Just then, Anita comes there and tells Angoori and Manmohan that she is having a party the other day and she wants to invite them. She also invites DK to the party.

In the next episode, Angoori, Manmohan and his friend Dk, come to Anita and Vibhuti’s house for the party. Anita comes there and tells everyone that she was murdered and her body is buried in the graveyard. She asks them to find the murderer.