Tiwari learns how to play 'dafli'. But will he be able to make Angoori dance to his tunes? 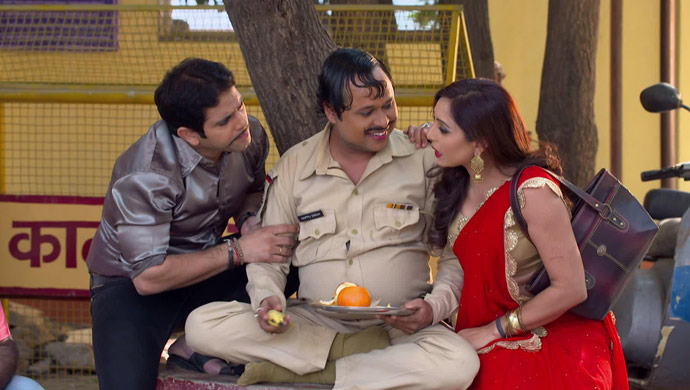 In the previous episode of Bhabi Ji Ghar Par Hain, we saw Tiwari calls Happu Singh to file a report against the robbery. Angoori who comes with some snacks for Happu Singh spills it on him. Tiwari then catches Vibhuti while playing Dafli. Tikka, Malkhan and Tilu give the cash to Happu Singh and Happu promises to give them the job.

In today’s episode, Vibhuti is seen playing Dafli near Tiwari’s house, listening to his dafli Angoori starts dancing. Tiwari comes and scolds Angoori for dancing. Angoori then tries to explain to Tiwari that she is addicted to dancing to the sound of dafli. Tiwari gets irritated watching her. He then meets Saxena and asks him to teach him how to play dafli. Saxena understands his situation agrees to do so. Tika, Tilu and Malkhan who have already given the cash to daroga, question him about the training to which he tells them to do his massage as the first chapter of their training.

Watch the episode below:

Tiwari, tells Angoori that now she doesn’t need to dance on anyone else’s tunes because he has learnt how to play dafli. But apparently, he fails to play the dafli and Angoori gets disappointed. Suddenly, Vibhuti starts playing dafli and comes into their bedroom through Tiwari’s window and as usual Angoori starts dancing. Watching this Tiwari gets irritated. He then thinks of complaining about Vibhuti to Anita bhabi but meets doctor on his way and the doctor tells him not to tell anything about the dafli as she is not well.

Bhoorey Laal comes to meet his daughter Angoori, but Vibhuti stops him on the entrance and offers him to have drinks together. Tempted by this offer, Bhoorey Lal agrees to it. While all of this happens, Happu Singh is still getting himself treated by Tika, Tilu and Malkhan. Later, Badaami comes into the scene and sees Tika, Tilu and Malkhan working for daroga. She then asks if  Happu Singh has new servants to which daroga tells her that their training going on. Listening to this Badaami asks if she can also get her sandals clean so as to know if their training is going on right.